I’ve been fortunate to have tried four different trail shoes this year; I even paid for two of them, it was very upsetting. The first were the excellent Salomon X Ultra GTX back in the Spring (HERE). The other 3 culprits I’ll be reviewing over the course of the next few weeks starting here with the Salewa Wildfires. 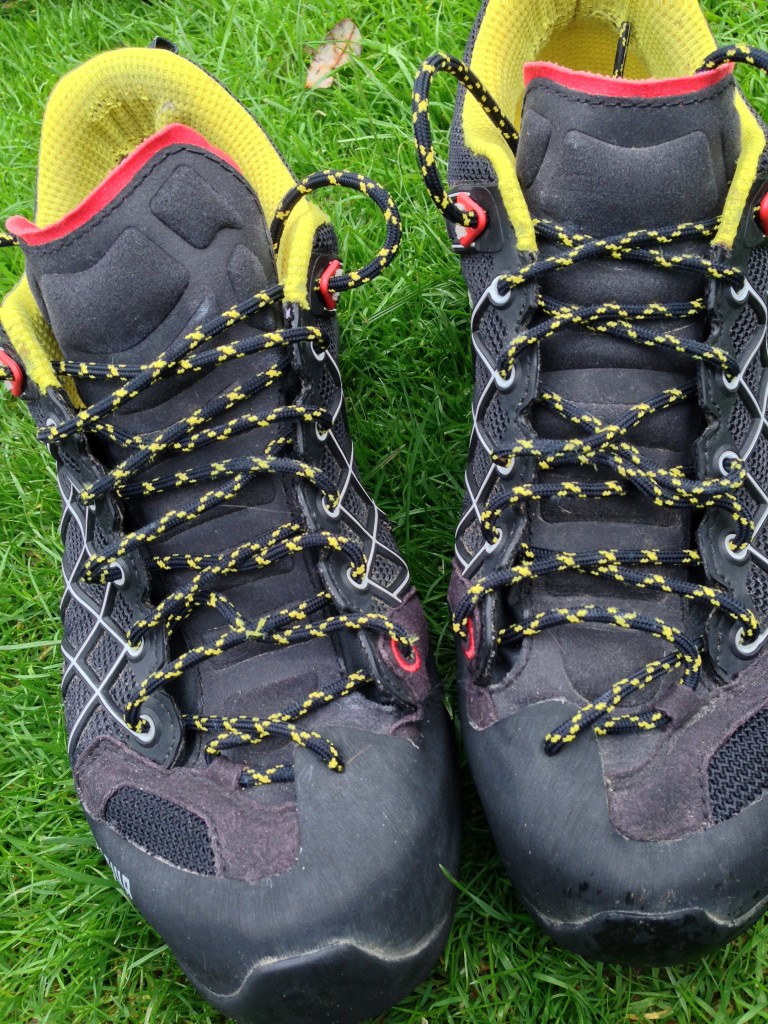 In due course I’ll also review a pair of New Balance 810’s and finally some Brooks Cascadia 7’s. With the exception of the Salewas which are more of an approach, and hiking shoe, the other crew members are off road running shoes, exactly the sort of leather and plastic that I like to wrap around my feet these days.

So let’s take a look at the Wildfires. Salewa are based in Italy and their products are more dedicated to the mountaineering area but in the past few years they’ve made some excellent inroads into the hiking arena. Founded in 1935, they’ve got an impressive heritage, a loyal following and produce equipment that commands a lot of respect in the outdoor industry. I first noticed the Wildfires in TGO magazine earlier in the year, namely because they claimed to have produced a shoe for those unfortunate individuals amongst us with wider feet. Not unfortunate for being physically different, more that we find it difficult to find footwear which caters for us. I didn’t even realise I had wide feet until it was pointed out to me at an outdoor store in Lake Tahoe on the PCT. I’m restricted to wearing brands from the likes of Inov8, Brooks and New Balance who offer a wider fitting or are made wider as a matter of course, plus a few others manufacturers.

This is not a shiny and new, straight from the box review. I used the Wildfires on El Camino this year so they have around 600 miles on the clock. Ample time to get to grips with them and find out if they really are any good.

They are sold predominantly as an approach shoe but equally suited to hiking. When I first received them I noticed straight away an element of sturdiness, they appeared and felt very solid. Sitting above the trail runner market where the Brooks Cascadia would live and veering into a more durable shoe capable of dealing with mountainous and rocky terrain, the Vibram Tech Approach EVO sole seemed to back this up. Because durability seems more of a concern to Salewa, the weight is above what I’d normally use, claimed at 390g per shoe but coming in at 422g on my trusty Salters (8.5 UK / 9.5 US / 42.5 EUR). My usual preference is 300g or under but as with the Salomon X Ultras, once a shoe hits 400g or above you demand and expect durability as compensation for the weight, otherwise it’s just not worth it. 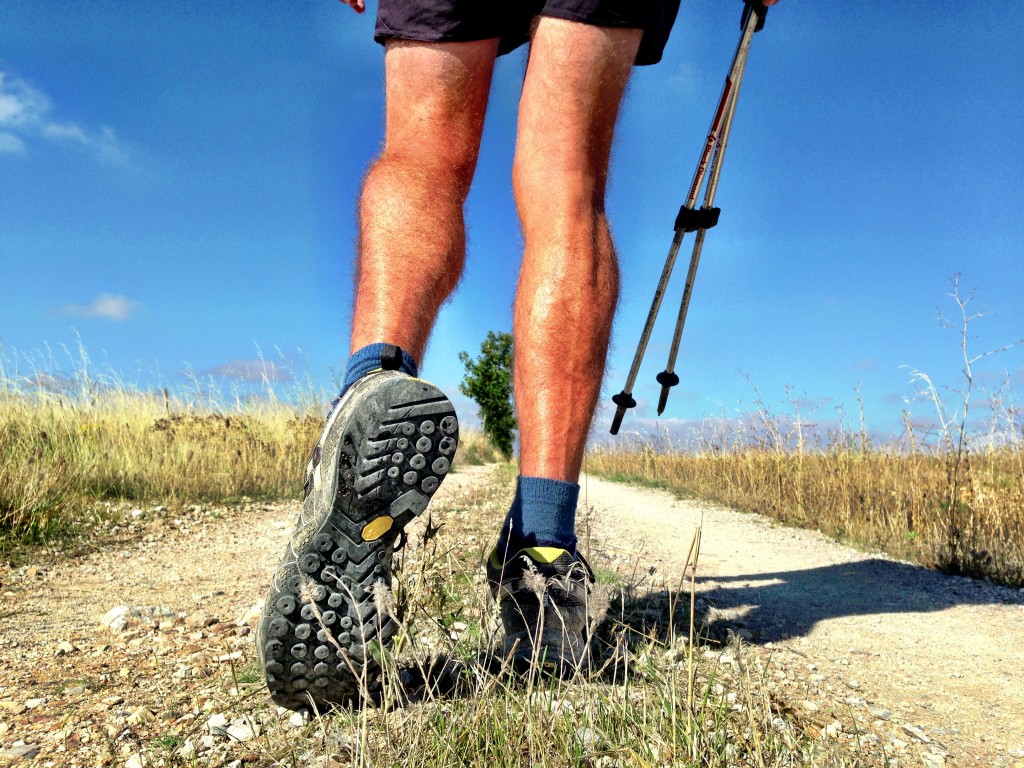 The Wildfires in action on El Camino

Let’s look at the Salewa specifications and then I’ll get onto how they performed. Something I haven’t seen on other shoes before is a treatment of silver ions. This process claims to destroy odour causing bacteria, in essence – after a 25 miler in 30+ degrees, they should smell OK.

A 3F System Evo design allows the ankle to hinge naturally. The upper is made from Ballistic Mesh with Salewas EXA shell technology. And the main issue I was interested in was the wider fitting claim via an MFF+ foot bed. Technoligical jargon to one side, let’s speak in English.

The silver ion treatment appeared to be doing its job. I walked in temperatures of up to 32C on the Camino and when arriving at a refuge in the evening I did an obligatory sniff test to see if I had to leave them outside the communal rooms. Suffice to say I never had to.

The 3F System Evo design allowing the foot to hinge could just be passed off as a gimmick. I notice on ankle length, 3 or 4 season mountain boots with chunky soles that the natural bend of the foot is somewhat limited. I can’t say I really noticed this aspect of the design because I’m used to lighter and more flexible shoes anyway but whatever it is designed to do, I didn’t feel as though my feet biomechanics were hindered.

Sounding somewhat like a gear geek, the EXA shell technology is actually rather interesting. Salewas Ballistic mesh upper is reinforced with the EXA shell technology, which means there is a lighter mesh material reinforced by what I can best describe as a more durable plastic ‘cage’. This protects the weaker mesh against knocks and scrapes whilst still being flexible to bend with the rest of the shoe. 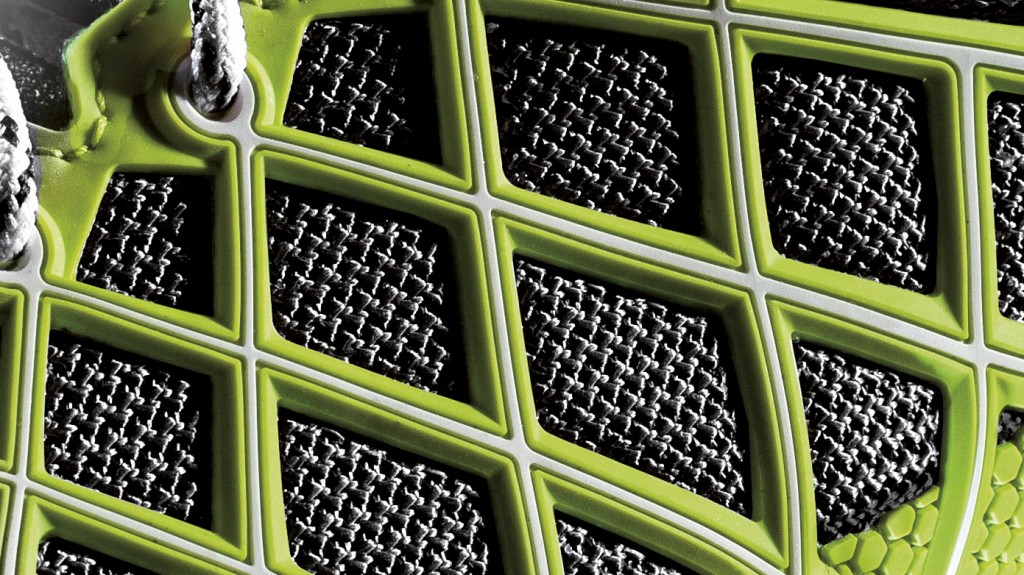 Finally, the MFF+ footbed is an ingenious little extra which I have not seen before. The supplied insole has 2 parts – a yellow, soft plastic lower section with a black, fabric upper which velcros in place. If your foot is too squashed, simply remove the upper black section and the foot sits a little lower in the shoe and away from the edges and top. It is obviously a method by which Salewa need not manufacture a dedicated wider fitting shoes as well as a ‘normal’ version, reducing costs but it does work. The tell-tale sign I encounter with shoes not being a good fit for my wider feet is my little pinkies rubbing on the inside of the shoes and this is something I did not experience with the Wildfires so thumbs up – the design appears to work well. 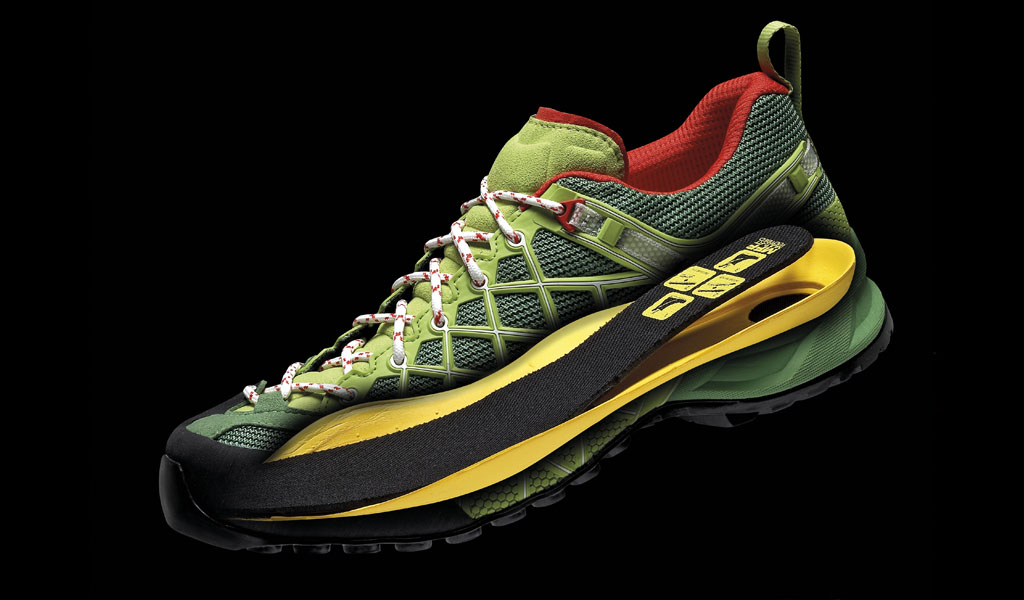 There is an excellent, tough toe rand wrapped around the front and sides of the shoe. This is something I do look for in hiking shoes, especially on the lighter trail runners where it is sometimes cut back to save weight. It’s a decent way up the shoe as well, meaning my little toes are protected from knocks, and believe me it bloody hurts. 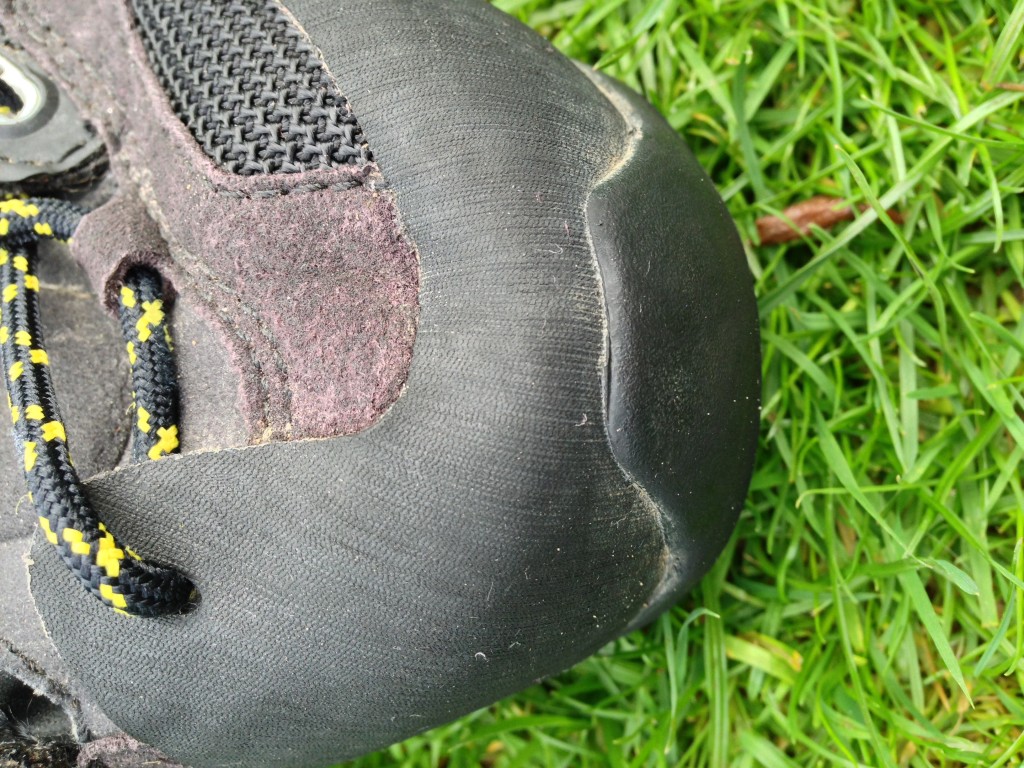 Impressive toe rand and no peeling from the sole overlap 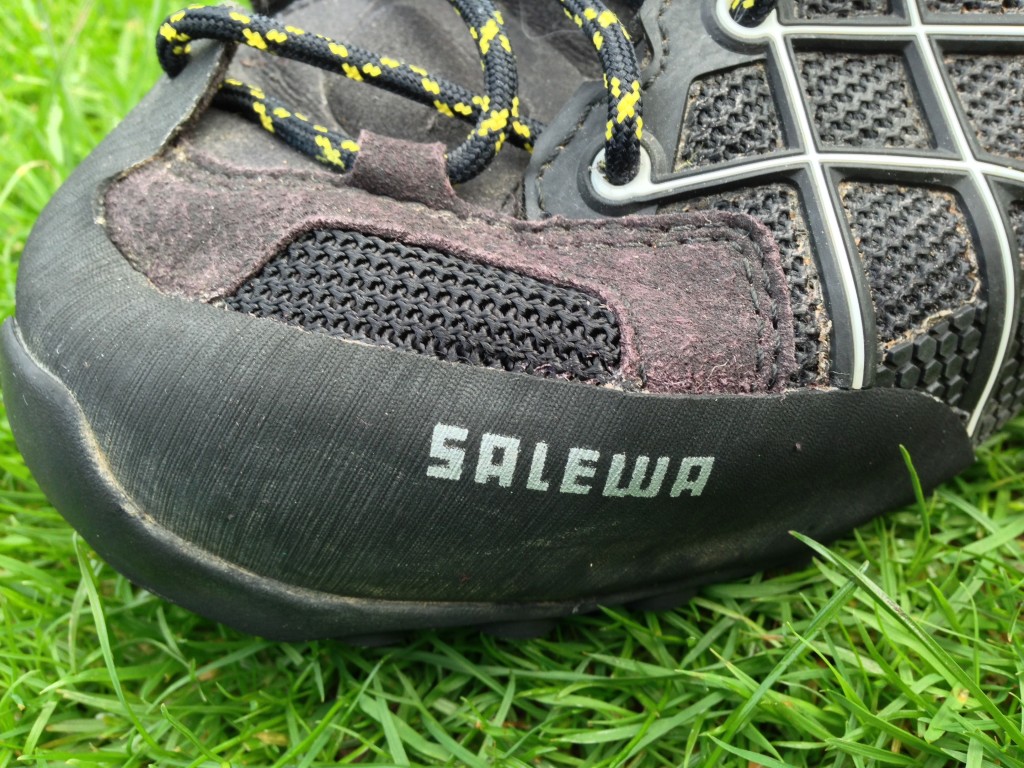 Another sure fire weak point in a lot of brands is the adhesion of the sole where it curls up the front of the shoe. This is normally glued in place and it’s one of the first areas to fail, becoming unstuck and slowly curling away. Some manufacturers stitch it through the shoe which is far superior. Salewa have just used the glue approach but whatever adhesive they’re using it’s working, there is no sign of it peeling away.

I won’t go into the grip aspect, let’s face it – all footwear nowadays pretty much does what’s asked of it in this department.

The main plus of the Wildfires is the durability. A pair of trail runners should last anywhere between 300 to 500 miles before it’s showing serious signs of wear and should be replaced. Full blown hiking boots from most manufacturers should last at least 1,000 miles. I expected the Salewas, being a mix of the two and sitting somewhere in the middle, to last me, well, somewhere in the middle. They have done that.

They’re a good trade of between a weaker trail runner and a hiking boot. On a thru-hike such as the Pacific Crest Trail at 2,640 miles, you could expect, depending on the brand, to potentially get through up to 6 pairs of trail runners. This is a trade-off between excellent comfort and light weight but obviously it stings you in the wallet, somewhere in the region of £600 ($900) total assuming £100 ($150) per pair. If you’re prepared to sacrifice a marginal increase in weight, and yes, weight on the feet does count because you’re still essentially carrying it, then the Wildfires could save you a decent chunk of your hard earned dosh. Assuming these last for 800 miles which I firmly believe they could, probably even more, then all of a sudden you could be looking at a total PCT thru-hike footwear cost of £300 to £400 ($450 to $600), a 50% saving.

Did they last? Yes, admirably. There is slight wear to outside of the heel caused by my over pronation but Vibram is tried and tested and the soles are certainly tough little blighters. The uppers are all still intact with no wear whatsoever meaning I guess that the Ballistic mesh is not just sales jargon. Something, however, has to give after 600 miles and the culprit is the inside material around the heel area. This has worn through. It’s not a fault as such because every shoe will start to wear naturally over the duration of its life at some point. I ended up sticking a section of Duct tape over it and the material does lend itself well to duct tape, it stayed on for 2 weeks. 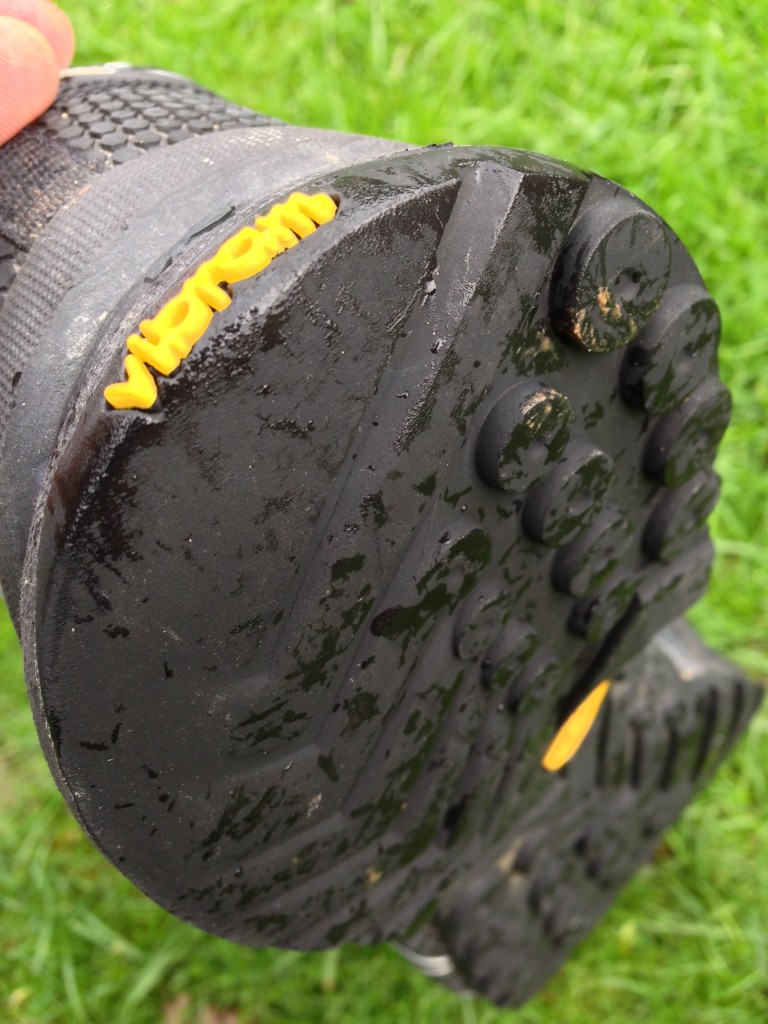 The Vibram wearing slightly, to be expected after 600 miles 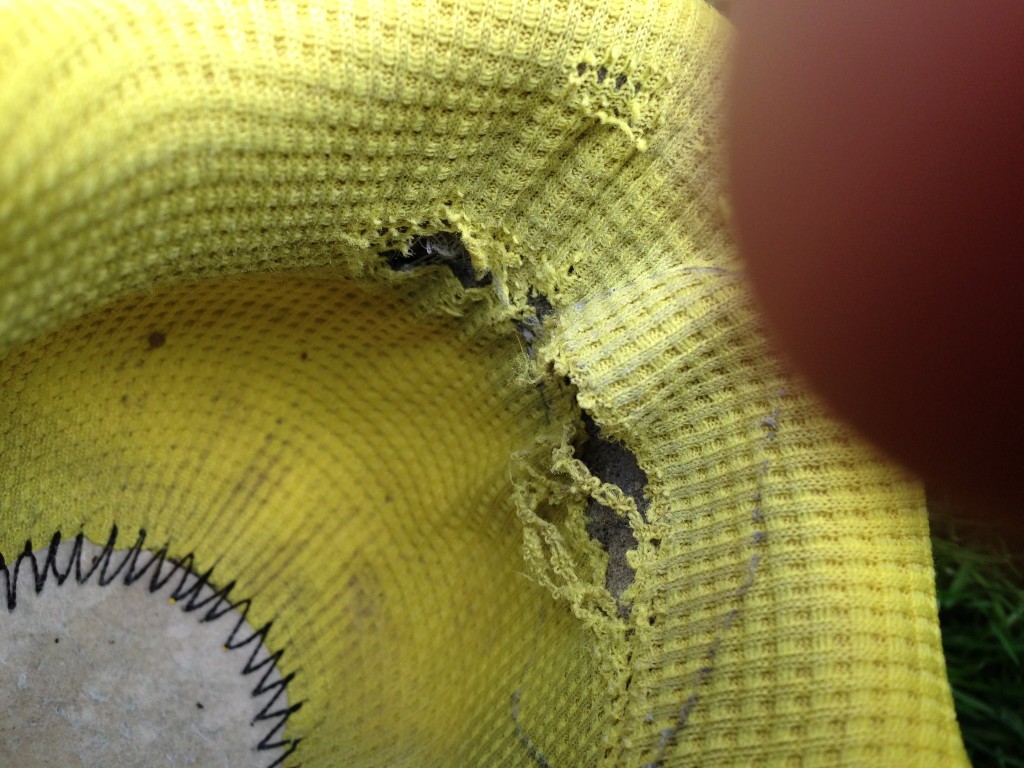 Something, somewhere has to give after 600 miles but it’s a minor fault

I’d even stick my neck out with these chaps and say with a little care and attention they could pull in a 1,000 miler.

The Wildfires are also available for women, and both pairs come in a Gore-Tex version.

Available in black, blue, red and a rather funky lime green sort of colour.