A common question asked by those who want to go and experience El Camino but need to fit in with annual leave restrictions is which part would be great to spend a week on. I see it asked regularly on-line and it’s been directed my way more than it’s fair share as well.

Well I have an unusual, but worthy suggestion for you. The stock answer to this question is to take a daily mileage figure that you are comfortable hiking, it could be 10, maybe 15, perhaps 20 miles. Allow a day to travel to Spain and a day back (this assumes you are travelling from within Europe). You are left with 5 days to multiply by your daily mileage by and then simply look back along the Camino Francais from Santiago to a suitable town and this will provide your answer. If you walk 15 miles a day then you have a total of 75 miles. This would make somewhere such as Sarria a good choice. Get the gist? 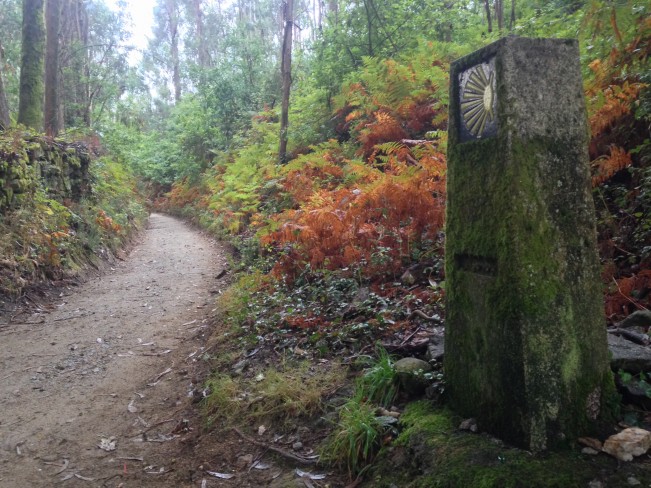 My suggestion is a little back to front, unusual and may even prompt a ‘Huh?’ from some of you but bear with me because it’s a beauty.

Santiago de Compostella is deemed the end of the Camino Francais route. Pilgrims arrive at the Praza do Obradoiro to be greeted by the imposing Cathedral of Santiago de Compostella. They may shed a few tears, reflect on their journey, collect their certificate of completion from the cathedral authorities, probably drink too much and celebrate. Then they may take a day’s rest, see Santiago and make arrangements to travel back home. 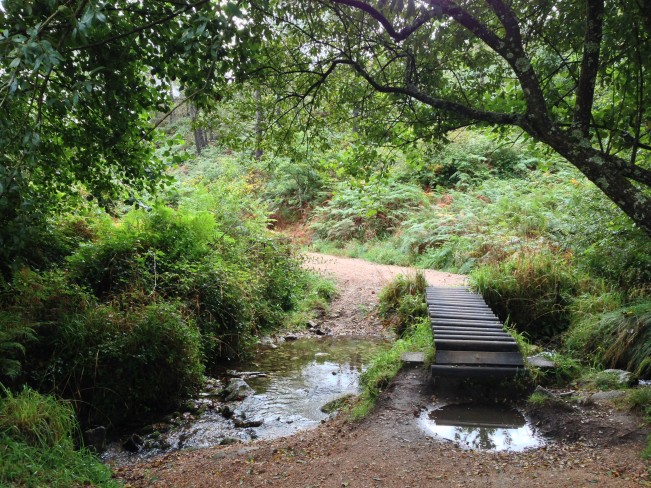 My opinion is they’re missing possibly the best part. From Santiago there is a further 55 mile route to the coastal town of Finistera, known in the past as ‘The end of the Earth’. From there, a walker can also travel 17 miles north to Muxia. My suggestion for a perfect experience on El Camino is to fly to Santiago (both Ryanair and Easyjet destinations from England or aim for Madrid amongst others if you need to fly internationally). Take one of several buses from the city to Muxia and walk this classic in reverse to Finisterra, then to Santiago. 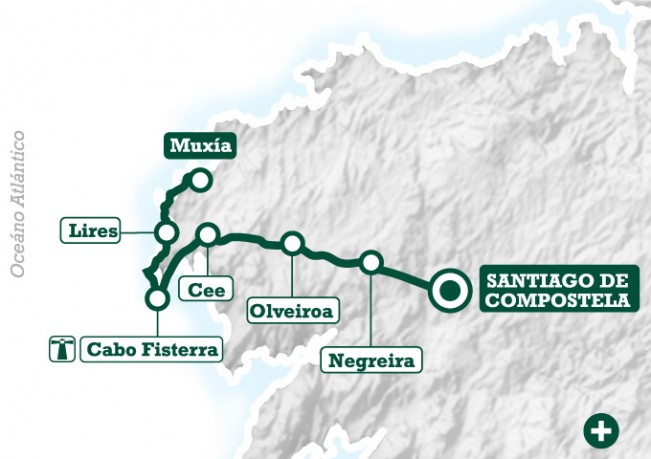 Carry on past Santiago and you’ll be well rewarded (image courtesy of tee-travel.com)

The main appeal is that’s it quieter than the hustle of walking west to reach Santiago along the traditional Camino Francais. Many have returned home, accommodation is less busy and the entire route is generally much less busy. I left Santiago having pulled in a lot of mileage (around 500) in around 20 days. In short, I was knackered and needed to chill out a little, slow down and savour my surroundings. I took three days to Finistera and a day to Muxia which proved the ultimate tonic.

Still in the province of Galicia, all the gifts this quiet area of North West Spain provides were still on offer. Lush green vegetation, totally out of keeping with what one might expect from the dry, arid pictures we see of this country. Mainly the route is in the open but there are also many stretches of shaded woods, sometimes lined with stone walls in keeping with it’s Celtic feel and roots. The trail is somewhat sandy, broken by the occasional passage of a clear stream and there are road sections, albeit quiet country lanes with little traffic. 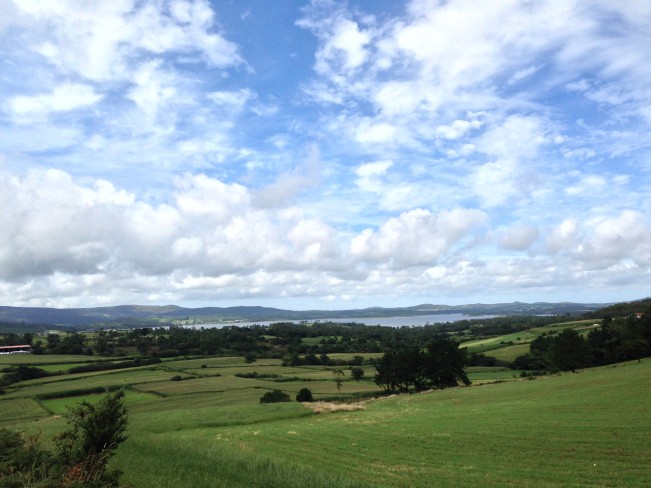 And just because it’s not the actual Camino Francais route, which in theory finishes in Santiago, you won’t be disappointed by the history either. Centuries old buildings, wonderful arching stone bridges and all the little gems of architecture are still there waiting to surprise.
If Galicia is renowned for it’s haunting mists that drape over the land, then Finistera, and indeed Muxia, are well known for their vibrant sun sets. The sun rises won’t disappoint either. 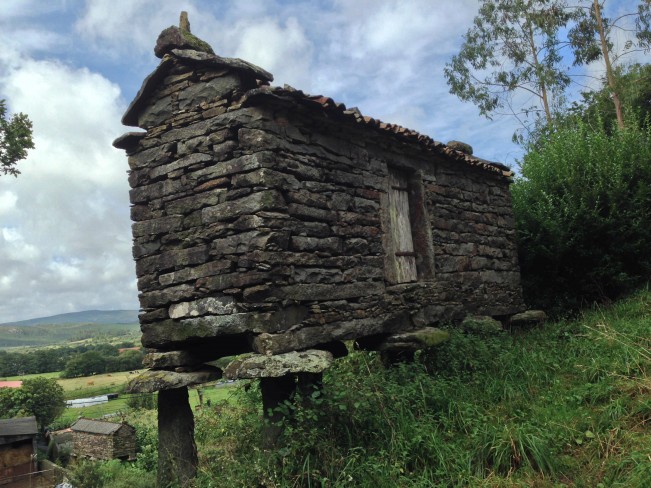 Passing through the main stops along the route of Negreira (14 miles from Santiago) and Olveiroa (34) my mind was occupied with when I would first glimpse the Atlantic Ocean. Each hill I crested kept toying with me until finally the pines parted and the town of Corcubion shyly peeked at me from 700 feet below. The ocean glistened in the mid-day sun, catching a hundred different shades of blue. I dropped down to emerge on the eastern edge of town and worked my way around the harbour, weaved through the alleys and climbed back up to Eucalyptus forest once more. 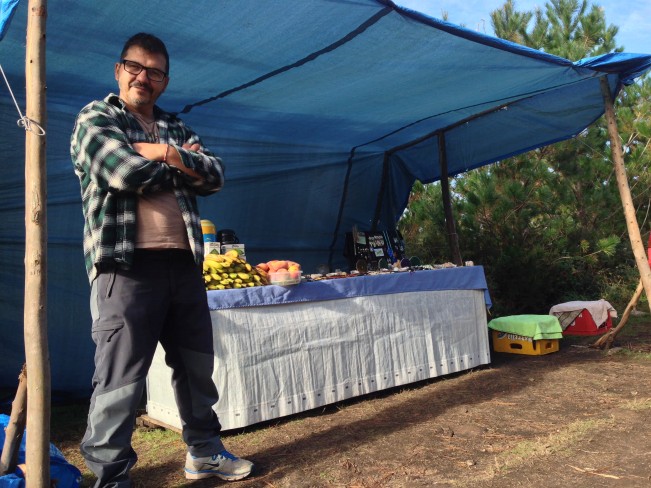 There’s a definite feel of cessation when reaching any ocean on a walk. You can’t carry on any further and that big, deep blue heralds the end of the Camino, should you have carried on past Santiago to Finistera. As for the final mile approach to this little fishing port, it doesn’t get much better. Again, descending down from the forest a golden arc of white sand curves away to Finistera itself, sitting at the edge of the mainland ahead of you. Tradition suggests it should be walked bare foot and a pilgrim must burn his clothes as a final act of devotion. The authorities now frown on this and rightly so, I’d hate to think of the amount of charred cotton and plastic that needed to be cleared from this beautiful beach in the past and I’d ask you also to refrain from the ritual as well.

I popped out on the beach half way along having inadvertently taken a small trail to the right. Linda, an English pilgrim who I had bumped into onto several occasions through Spain carried on the trail. I removed my shoes and alternated between dry sand and the gentle water washing over my ankles. 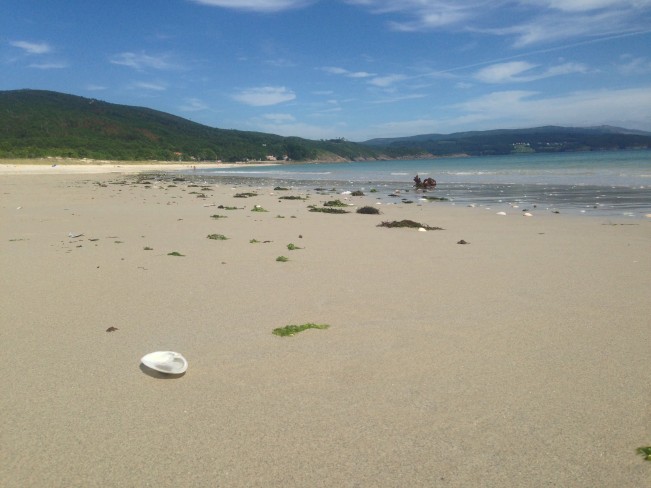 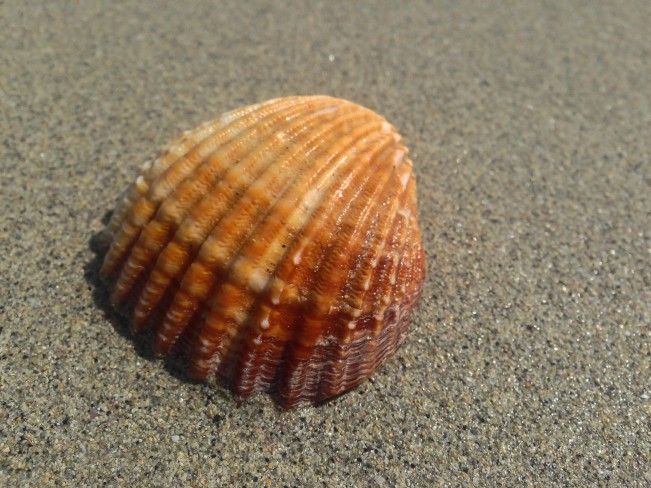 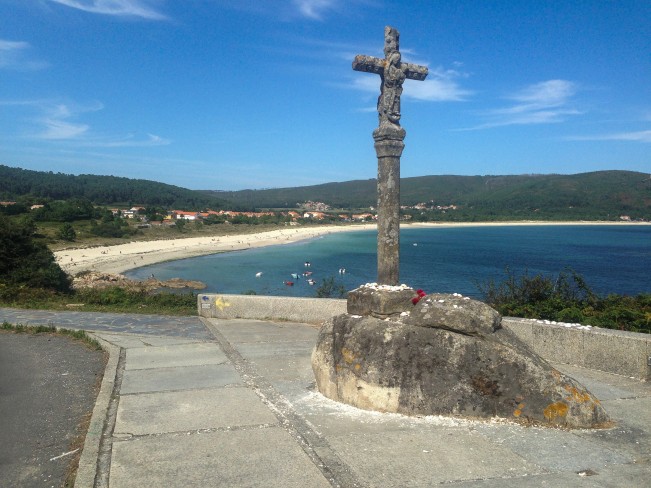 Finistera itself will never win any best village awards but it’s pleasant enough. A mix of older buildings jostle with more modern offerings. Boats roll around in the harbour which is lined with a few restaurants and bars and the fishing industry here delivers wonderful ingredients for any seafood lover.

The communal Albergue gets busy and it is cramped. I’d advise booking one of the several other private establishments or if you’re finishing there, treat yourself to a hotel.

If you’ve taken the time to reach Finistera, you should allow one final day for Muxia as well. I ignored this advice on both my previous hikes but this time I left the following morning to a ruby sun rise and headed north for the 18 miles walk. Again, hiker numbers had dropped as many return to Santiago so the trail was devoid of walkers save perhaps 10 others over the course of the day. 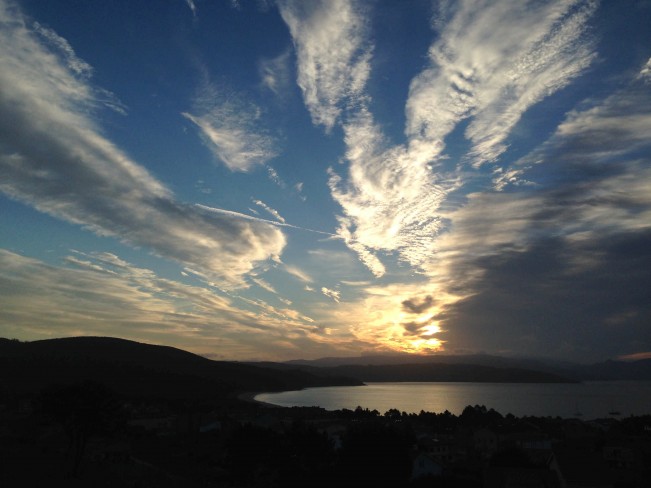 The trail is inland and the ocean always to your left. Occasionally I caught a glimpse of blue through the green and passed through hamlets that never seemed to wake up. Trail markers can be sketchy at times, to the point where several times you may wonder if you are on the right route but sure enough, late afternoon I descended once more to meet up with the Atlantic which seemed to have been dyed a deeper blue.

I carried on for a couple of miles along the coast at sea level, stopping to catch photos of a ragged, craggy, dark grey shoreline nurturing little strips of sandy beaches. The way converges onto Muxia which sits proudly on a narrowing peninsula and is subsequently surrounded on all sides by water except to the south. 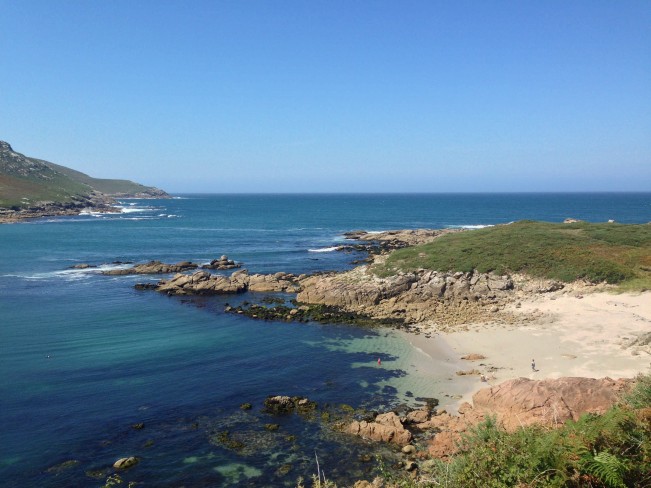 Walk through the village, up a small hill and the Shrine of Virxe da Barca appears with a small lighthouse to it’s side. Both sentinels stare out over the ocean towards America and as I stood on the rocks contemplating my adventure, white foamy waters crashed below me and the Atlantic rose and fell in grand swells.

As I said before, there’s no more fitting an end to any walk than an ocean. 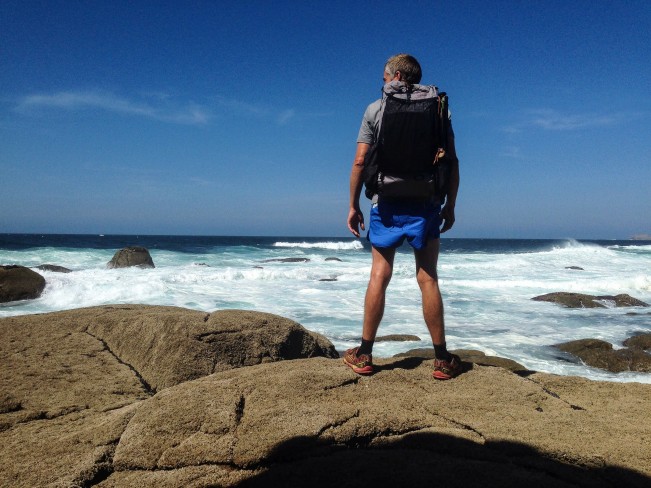 The ocean, Always a fitting end to any walk

If you intend to walk the Camino Francais route in 2015 and after, be sure to check out the upcoming Smartphone app I am working on with High Sierra Attitude. It will be available in early 2015. Don’t leave home without it.