Ambasmestas at 6.30am is dark and quiet. Keen for an early start to get up and over O Cebreiro I pull my jacket collar up around my neck, stuff my hands deep into my pockets and scout for an open cafe. I have about an hour of darkness left and quick glances behind me reveal the horizon slowly starting to glow orange. 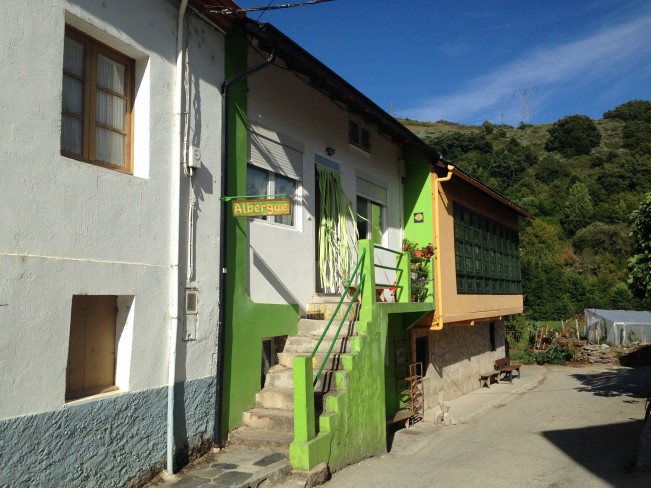 Passing through Vega de Valcarce, Ruitelan, Las Herrerias and La Fabe the way starts to rise. Hills either side cup me in, water gushes down the River Mazaco as the mountains funnel me upwards. Sunlight gradually clears the tops and moves slowly down to meet me, I’m grateful for the warmth on my face as a mist slowly evaporates, creating vapours and the dew winks back at me.

As always, I ask the mountain’s permission to climb it. I don’t know why I do this but I always have, just out of respect, it is after all, much bigger than I am. The track steepens, rocks slick with moisture protrude from a dark, damp earth. The sunlight is blocked by the trees, chilling the air and I smell a damp, musty soil. Sunlight discovers chinks in the foliage and paint patterns on the ground. 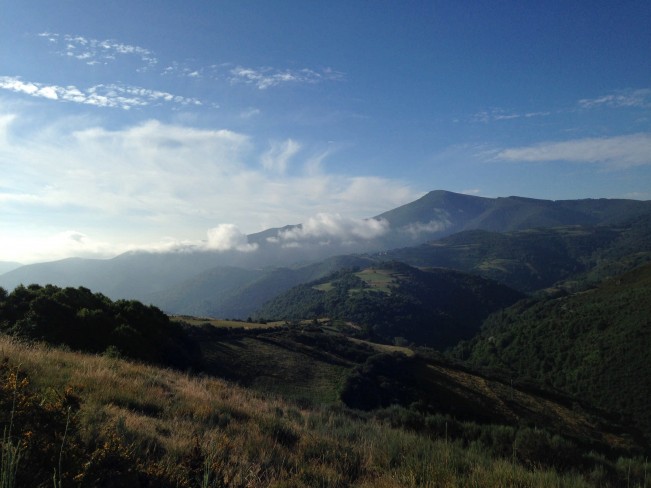 Looking back down from O Cebreiro 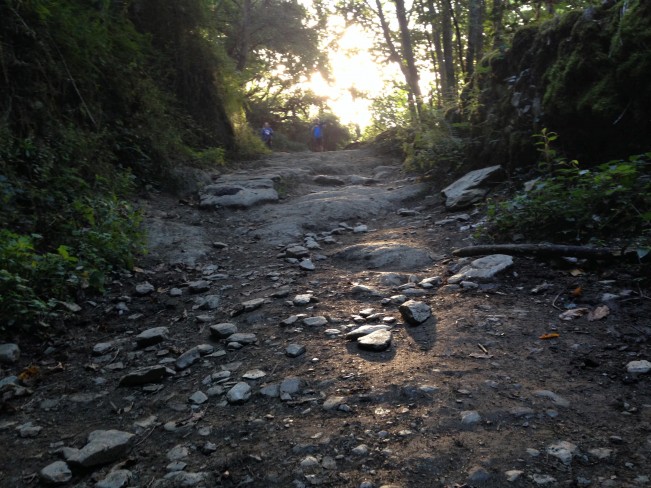 And the way up

As I clear the woods O Cebreiro appears above me. A blanket of cloud drapes the col and wet, wispy fingers of mist tickle down the mountainside. Before long it engulfs me, I pull on a layer and put on my sunglasses as the sun is magnified. I reach O Cebreiro and the small cluster of houses lining a cobbled street. The mist hangs motionless, twinkling, as people appear and disappear in the gloom and the cafés do their best to warm everyone up. I climb a little further, then start to descend but it’s not until Fonfria that I emerge from under the cloud, grateful for the sun again.

I struggle to get my temperature comfortable. Just a t-shirt, then a long sleeve shirt, a jacket or perhaps all three. In the end the long sleeve wins, just a little colder being preferable to overheating. I’m up around 1300 metres still, waiting for the trail to plummet down to the town of Triacastella where I’ll see how I feel. If I’m tired, perhaps an overnight stop will win the day but I feel good so the sweet little of village of Samos, a further seven miles, with it’s monastery beckons. 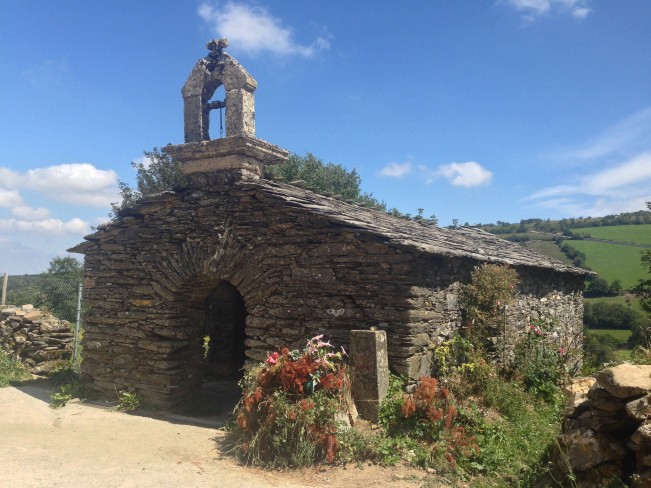 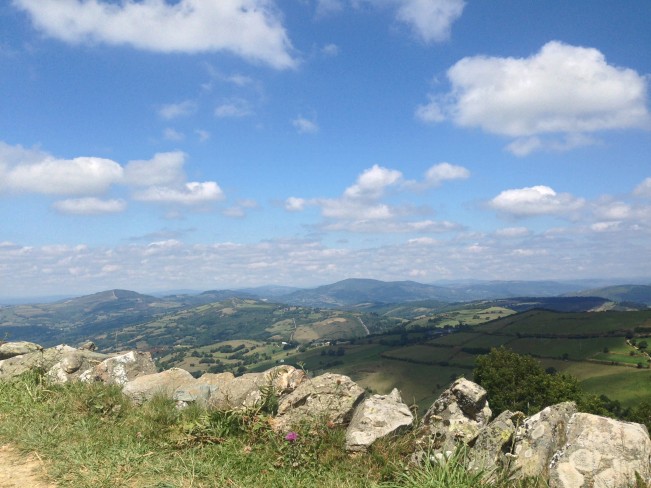 It’s around a 600 mile route from the start at St Jean pied de Port, past Santiago, then onto the coast at Finistera, and a further day to Muxia. I’m treating the first 500 miles as a test and I’m trying to complete it all in less than three weeks. I’m on target so far although feeling the physical side a little. I don’t know why I have chosen to do this, sometimes I just like to push myself to see where my limits lie. After Santiago I will slow down and take the four days to Muxia at a far more sedate pace, a suitable reward for my efforts.

Passing through Triacastella I continue to Samos, bringing in 29 miles for the day. I cross the Rio Pequeno and admire the monastery, founded around the 5th/6th century and one of the oldest monasteries in the western world. Samos is gently cradled in the lee of the surrounding hills and somewhat sheltered. It’s a tranquil place, a couple of places to rest overnight and some local bars cater for a pilgrim’s needs. 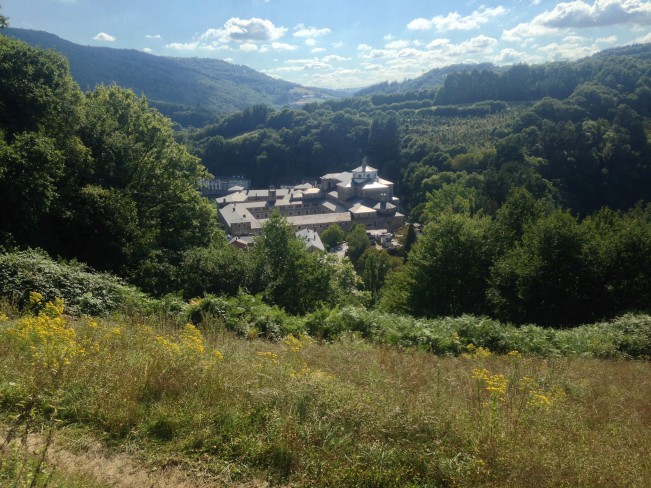 After a long day, it was a relief to finally lay eyes on Samos, cupped in the valley

Checking into the Albergue Val de Samos I have little inclination of the pending lack of sleep. Firstly, a smaller church chimes with a pre-emotive toll before counting the hours. The main bells of the monastery then chip in, just in case anyone missed the first lot. Then, as is common in Galicia, both establishments repeat the sequence for some strange reason. This carries on hourly all through the night.

If that isn’t enough, my dormitory is shared with five Italian cyclists who, ignoring the advised 10pm curfew, stampede in, inebriated, at 1am. Carrying on their animated conversation, laughing and joking, one of them kicks my rucksack as he stumbles around the room. I give it five minutes before my impatience gets the better of me and release a tirade of verbal abuse with more swearing than Gordon Ramsay in a bad mood. The silence is priceless, even if they don’t understand what I am saying. 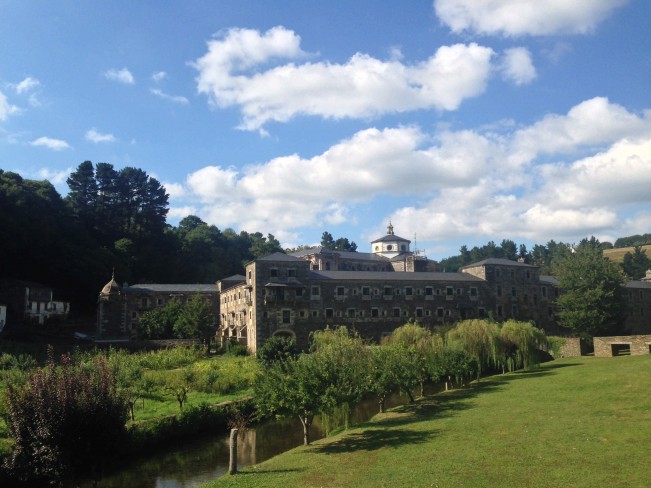 An uninspiring couple of hours starts the following day along the road to Sarria, which itself is not the most attractive town on the Camino but once through it, the countryside soothes me once more. The section after Sarria to Portomarin weaves along quiet country lanes and dusty tracks. A succession of relaxed hamlets offer an occasional refuelling stop, farms appear as cows are herded by farmers and their dogs to pasture.

I cross over the Rio Mino, walking high on the bridge that leads to Portomarin. Rebuilt in the 1960’s when the river was dammed, they saved just the two churches, San Pedro and San Nicolas, moving them stone by stone to higher ground. The rest of the town built around them is a cruel companion. 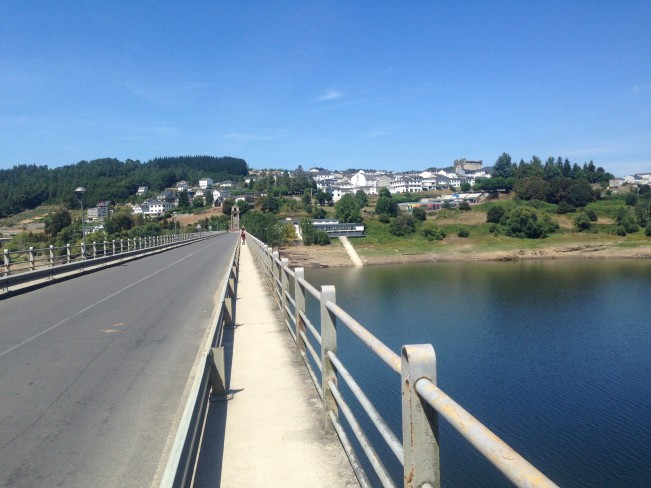 Bridge over the Rio Mino into Portomarin

I leave, as I did last year, bound for the tiny hamlet of Gonzar where the Casa Garcia Albergue sits, a further five miles. I’m tired, my push for a quick 500 is starting to take it’s toll and my feet start to retaliate. It’s a 28 mile day when I arrive and I slump at the bar, the barmaid obliging my request for a gin and tonic.

I sleep soundly, Santiago is just 72 miles over those hills. 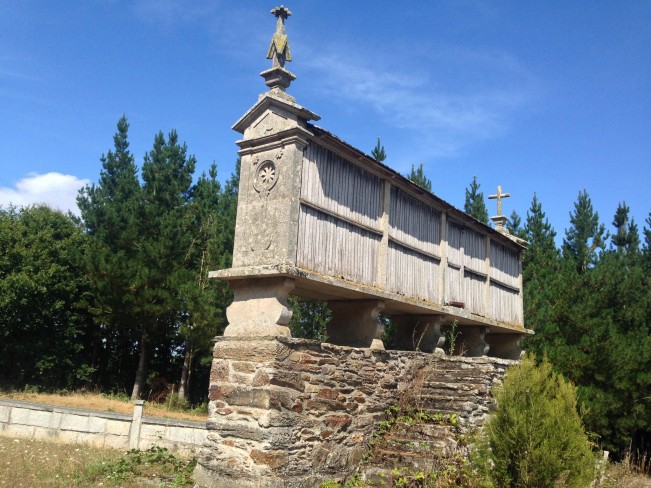 A Horreo, or granary, common in Galicia