I leave the Albergue Verde in Hospital de Orbigo after another excellent stay. The food itself was just as good as last year. After all the somewhat limited pilgrims menus, it was good to be treated to a full vegetarian feast.

I turn right at the end if the village towards Vilares de Orbigo. The ten mile route is the longer of two options but the other follows a noisy road, I’ll take longer and quieter over shorter and louder anytime. Why some of the others don’t follow suit I don’t know.

I walk for a couple of hours and sure enough, the same, red, crumbling building is still there. David, who owns this place in the middle of nowhere, an hour from Astorga, dreams of turning it into an Albergue. For the time being, he tends to a stall by the side of the trail brimming with healthy food and juices. He pokes some wood in the stove to keep a constant supply of hot water for the coffee and tea and he remembers me from last year. I eat more than my fair share of peanut butter, olives, nuts and melon, stuff 5 Euros in the donation box, return his hug and wish him well. 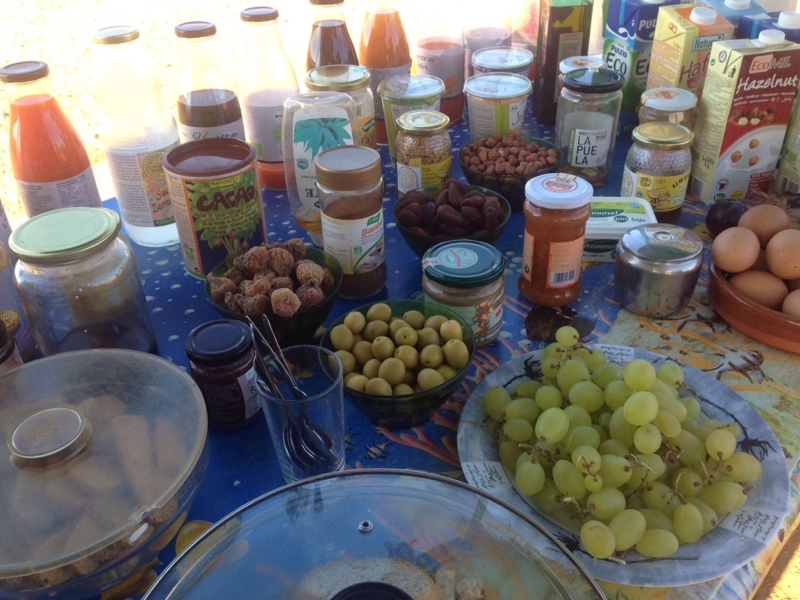 I drop down to Astorga, a pleasant large town but it’s market day. The streets are clogged with hundreds, no thousands, of people roaming around aimlessly with their hands clasped behind their backs looking for nothing in particular. I squeeze past them, wait patiently behind others, stop for oncoming shoppers, then engage first gear and accelerate the hell out of it all. 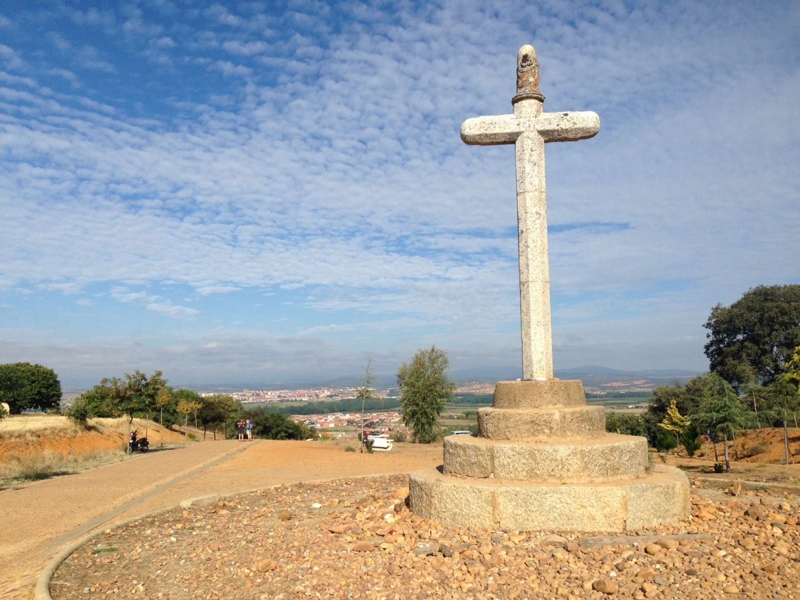 I figure I can reach Rabanal del Camino by mid-afternoon. It’s a modest 300 metres above me but the incline is gentle. The Montes de Leon are hovering right over me now and I look forward to the fresh, cooler, mountain air.

Galicia, the final province of the Camino beckons with it’s hills and subdued tracks rolling through emerald green countryside. Its Celtic roots are reflected in some of the traditions, cuisine and music.

I arrive in Rabanal and head straight for the Albergue Gaucelmo where I stayed in 2002. It’s run by the English St James Brotherhood and I have fond memories of afternoon tea with biscuits, a building of character, a real fire despite it being too warm now and approachable staff. 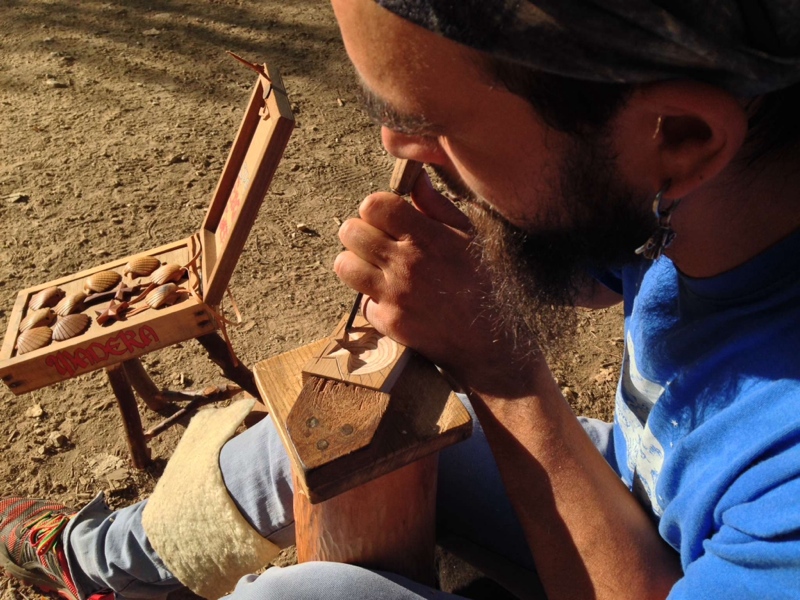 Jose, a local from Villafranca, spends his days carving shells for the pilgrims

I walk through the arch into the courtyard and perhaps ten pilgrims are gathered around a table with the staff, indeed drinking tea.

I’m informed that they have run out of Earl Grey but will English Breakfast suffice? Of course I reply, laughing at the sheer preposterousness of drinking tea with the English in the middle of the Spanish mountains. I enjoy a good stay and leave early in the morning, happy to have good memories re-kindled.

I climb to the Cruz de Ferro, the highest point of the Camino Francais in Spain at 1528 metres. This tall, wooden pole topped with an iron cross is one of the better known landmarks on the trail. Pilgrims leave a memento here, usually a small stone carried from where they live, as a symbol of leaving their worries behind. I leave nothing but somewhere under the pile of stones is a silver pendent from the cathedral in Le Puy en Velay, France, which I left during my first walk on the Camino in 2002. 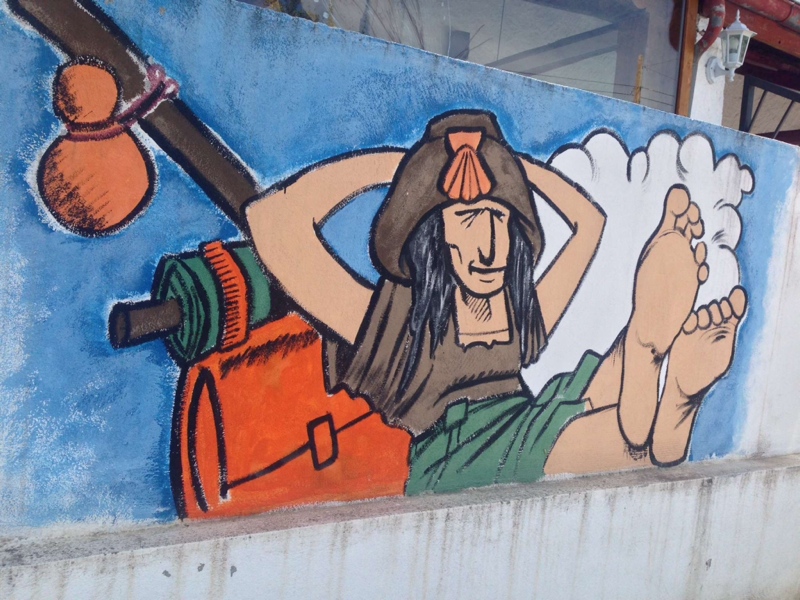 This guy’s feet look in way better shape than mine

A long stretch of around 10 miles bobbles up and down with wonderful views before I reach Molinaseca. Children play in the Rio Meruela under the bridge, cooling off in the heat although the mountains have cooled my environment. Ponferrada is only four miles away but takes ages to arrive, as I remember it did last time. The Camino skirts this large town to the south before emerging to the surreal sight of the Templars castle, the Castillo del Temple. Beautifully preserved, it’s turrets and stone work, with the Spanish flag motionless takes my breath away.

I move off but relent and re-visit the little cafe opposite for some hot chocolate and churros (small donut rings). The Albergue lies about 1/2 a mile away but when I reach it, a queue of pilgrims stretches out the door. I glance in one of the windows to see a small room, one of several, brimming with pilgrims. It looks stifling in there and I relent, check the bank balance and succumb to a half decent hotel for the night.

Vilafranca del Beirzo holds fond memories. It’s an attractive little town and I spent some four weeks here in 2002. Waiting for a friend to arrive to walk the last section with me, I worked on a new extension for Jato, the owner. I’m not staying this time, keen to keep my memories as they are.

I dip down into the town, eat some food and drink some water before climbing steeply. The two options leaving Villafranca entail either a six mile road walk or a seven mile alternative that climbs up to fantastic views. I pick the latter and peer down at a line of pilgrims weaving along the road. I question why they have taken this route when they could be in the cooler air, away from the traffic, walking through chestnut woods. I don’t find any answers. 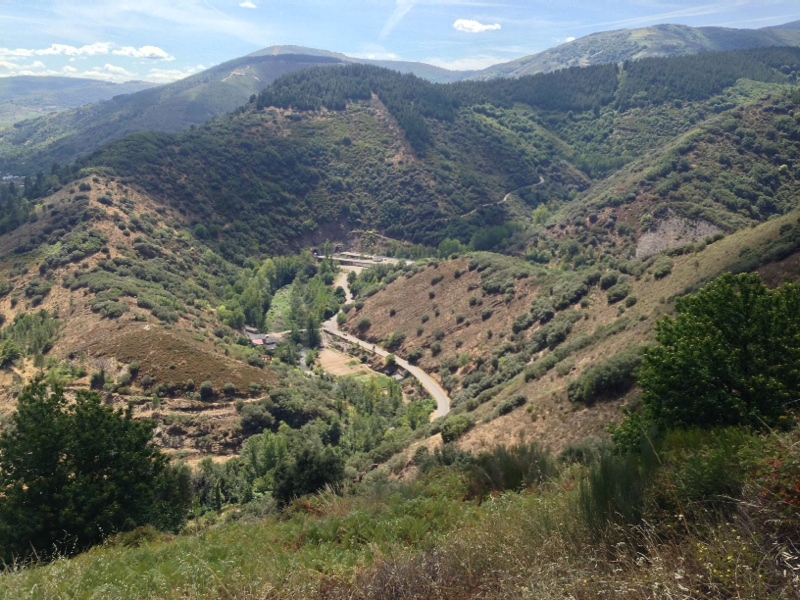 Pilgrims dot the road walk as I climb into the mountains

Take the road or pass through here? Not too difficult really

I fall down to Trabadelo and follow a quieter road to Las Herrerias, La Portela de Valcarce, and finally arrive in Ambasmestas. Angel, the owner of the Das Animas Albergue, shows me the dorm which is empty save one other Spanish cyclist.

I go to bed early, perhaps around 9pm. I need my strength for tomorrow as the climb up to O Cebreiro beckons and another long day is imminent