A tiny dust tornado comes whirling towards me at an alarming velocity, sometimes they just pass over the trail ahead but some make a beeline directly for me. I move to one side but it changes direction, I swerve to the other and it alters direction again. In the end I just bow my head, shut my eyes and it swirls straight through me like a meteorological ghost. 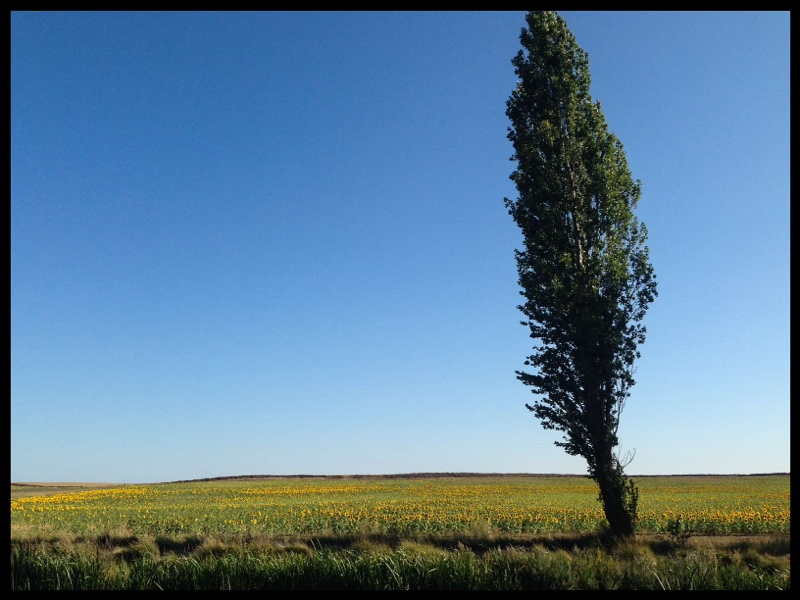 I pass through Granon where I stayed in the Hospital de Peregrinos San Juan Bautista last year. A basic affair, just a mattress on the floor but the food was excellent. I’m not stopping, after only 4 miles I’m barely warmed up.

Redecilla del Camino does make me put the brakes on for a coffee though, the last caffeine shot is wearing off. A few pilgrims sit a few tables away but the village is quiet, warming up for an imminent siesta. It’s turned cooler which I’m grateful for. The sun still beats down mercilessly but has been tempered, making for ideal walking. 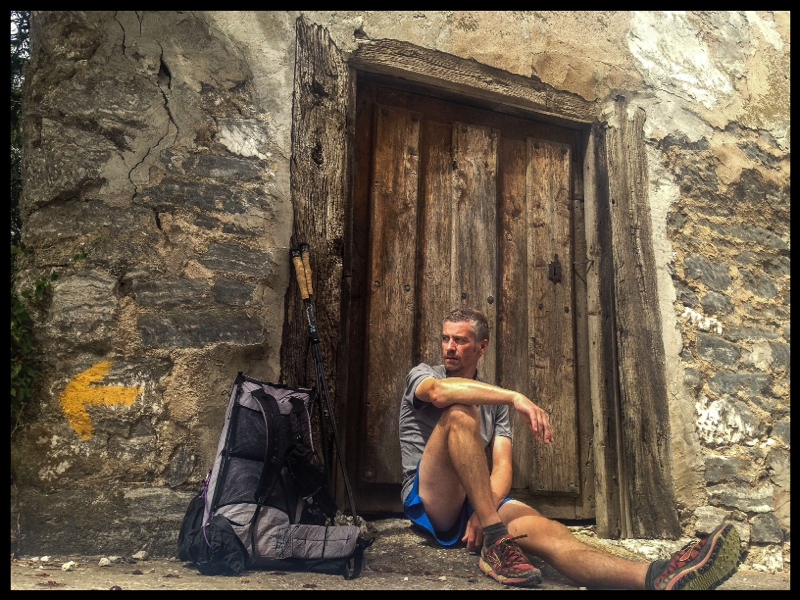 Sometimes you just have to get out of the sun

I reach Belorado at lunch, stop at a small store and buy a chunk of cheese, a couple of tomatoes and some bread. I could have stopped at one of the numerous cafés or restaurants but this is all I wanted; basic, satisfying food. I rip off chunks of the baguette, break off a generous piece of cheese and suck the juice out of the tomato.

I didn’t see another pilgrim walking all afternoon, going along with my theory that August could be a great month to take this walk on. Some are already sitting outside the Albergues resting at lunch, perhaps escaping the sun. I passed through Vilambistia, Espinosa del Camino and stop at a small bar in Vilafranca- Montes de Oca. From there to San Juan de Ortega there is wonderful eight mile forested section which climbs up to the summit at Valbuena and then gently slopes down. There is little at San Juan de Ortega, just a church, bar and Albergue. 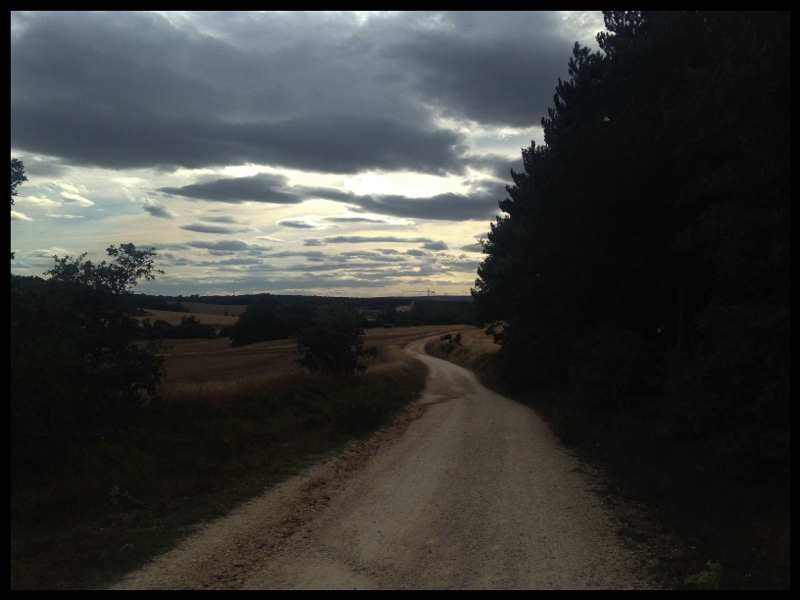 By the time I arrived it is 7pm and I have 31 miles on the clock for the day. Not in the mood for company, I walk a further mile, perhaps by small part intuition, and another by memory. It was a good choice, the land flattens out and a forest borders the Camino. I set up the tent just nestling in the trees, the locals pass me waving and shouting a ‘Buenos Dias!’ It would appear that wild camping isn’t frowned upon out here. 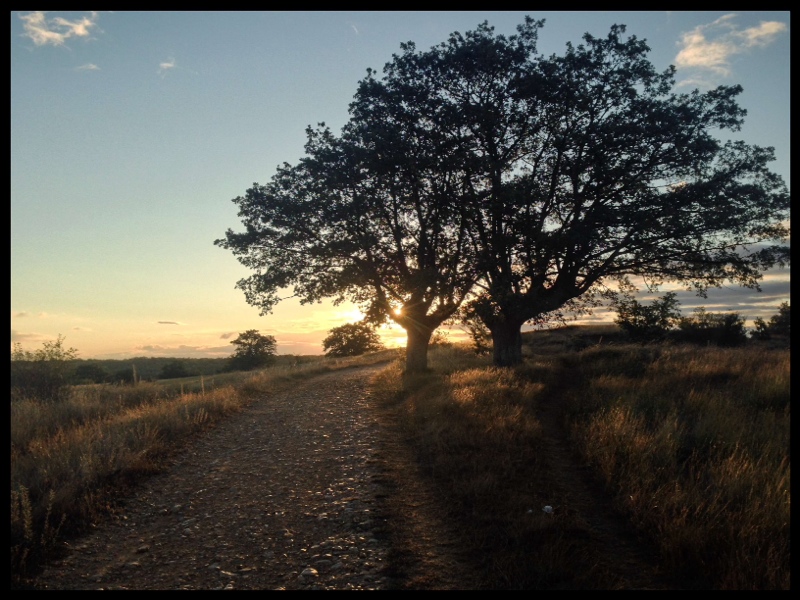 The temperature plummets and I put on all the clothing I own, whilst wrapping my sleeping quilt around me tightly. Then, it starts raining. For an hour or so the parched countryside receives some relief and as I listen to the rain drops on the tent, they lull me off to a deep sleep.

Having moaned about the heat, leaving my camp spot the following morning, I start complaining about the cold. I had been walking in shorts and a t-shirt all the time but trousers, t-shirt, long sleeve shirt and jacket are struggling to keep me warm this morning. I was glad to see Atapeurca appear at the end of a long, straight road and I enter the one bar that is open, a sea of frozen faces returns my gaze, hands cupped around hot chocolates and coffees.

In 1994, the remains of an 800,000 year old European were found. In 2007 a 1.2 million year old jawbone was excavated and is still thought to be the oldest hominid in Europe, an ancestor to homo sapiens and Neanderthal Man. It is now a UNESCO World a heritage site and works continues.

My work continues as well as I climb out of Atapuerca to summit the hill and start not only the descent, but shortly after, the passage through the city of Burgos. It is my least favourite section of the Camino. Burgos centre is pleasant enough but the outskirts are a mess. Graffiti is strewn on walls, stray cats and dogs roam, derelict buildings crumble and litter catches the wind. It is also difficult to navigate through. I went wrong least year and as it turned out, did the same this year as well. 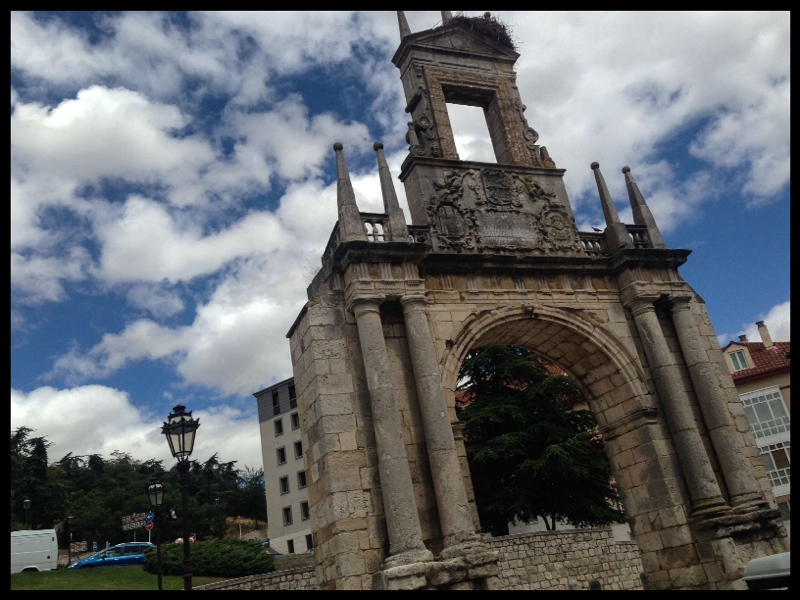 But Burgos is wonderful in places also

There are two variants on my map and also another not shown. My chosen route, which follows the true El Camino of old, entails a hair raising dash across a busy main road, albeit with an island of safety in the middle. I don’t recommend it. I stop briefly to pick up some food, take some photos of the Cathedral de Santa Maria and promptly speed out the other side.

For a couple of hours after Burgos it doesn’t do much better. There’s a nice country track for a while but the Camino veers back near to the railway and motorway, under bridges and dusty road works. It’s not until a pilgrim reaches the safe haven of Tardajos that a sigh of relief can be breathed. Now its back to wide open spaces, the occasional village, water fountains and peace.

I know I don’t paint an attractive picture of the Burgos section but you can’t walk for 500 miles through a civilised country such as Spain without passing through some undesirable parts. After Burgos and up to the city of Leon is a stretch known as the Meseta. This, to some, may also prove tiresome. 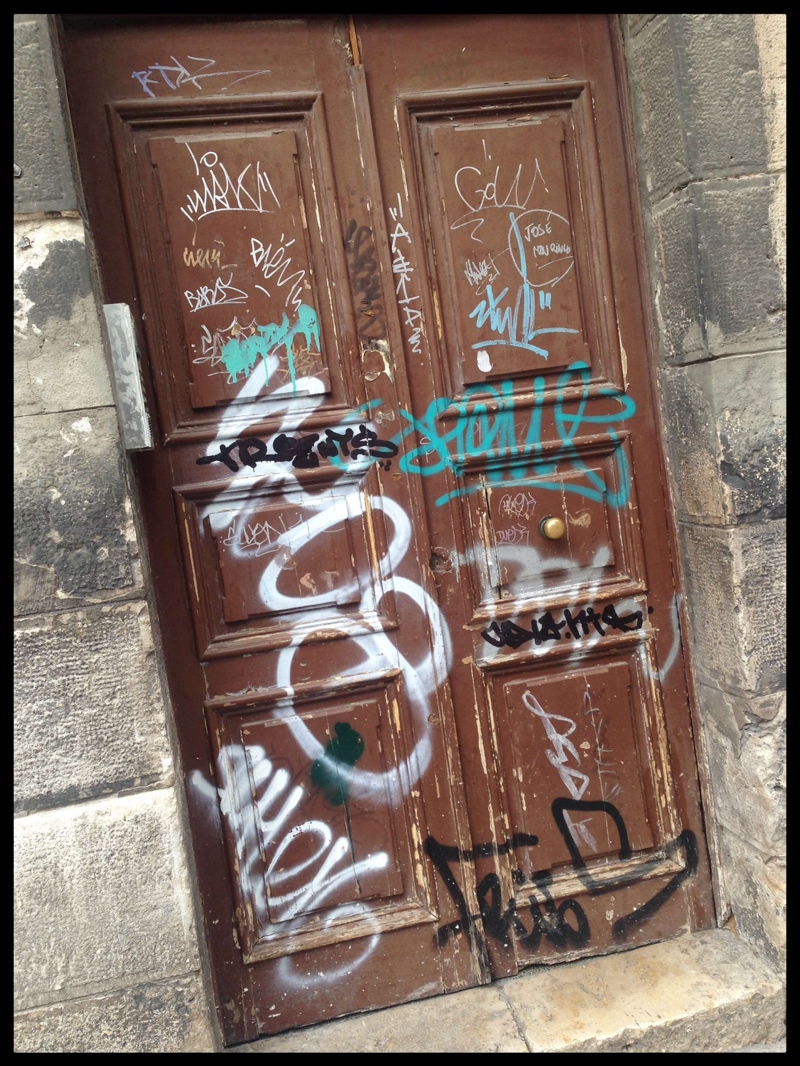 The Meseta is about 100 miles long and there’s little to cast an appreciative eye over save corn fields. The Camino often runs in a dead straight line, it gets ridiculously hot with little shade, and the only company you have is the crunch of your foot steps. However, many like me love the section. The wide open expanses, the challenge, the planning and the freedom I relish.

The Meseta is coming soon. Bring it on. 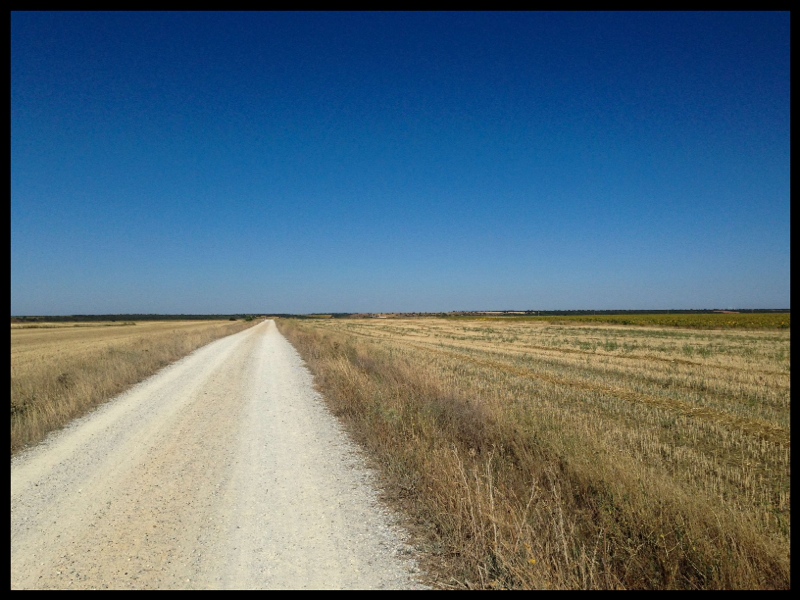 The Meseta. Some hate it, I love it