The houses in the Basque region of France and Spain are painted in a claret red and white, including those of St Jean Pied de Port. This unassuming little town lies in the creases and folds of the foothills of the Pyrenees and is the start point for the Camino Francais, a 500 mile hiking route through Northern Spain. 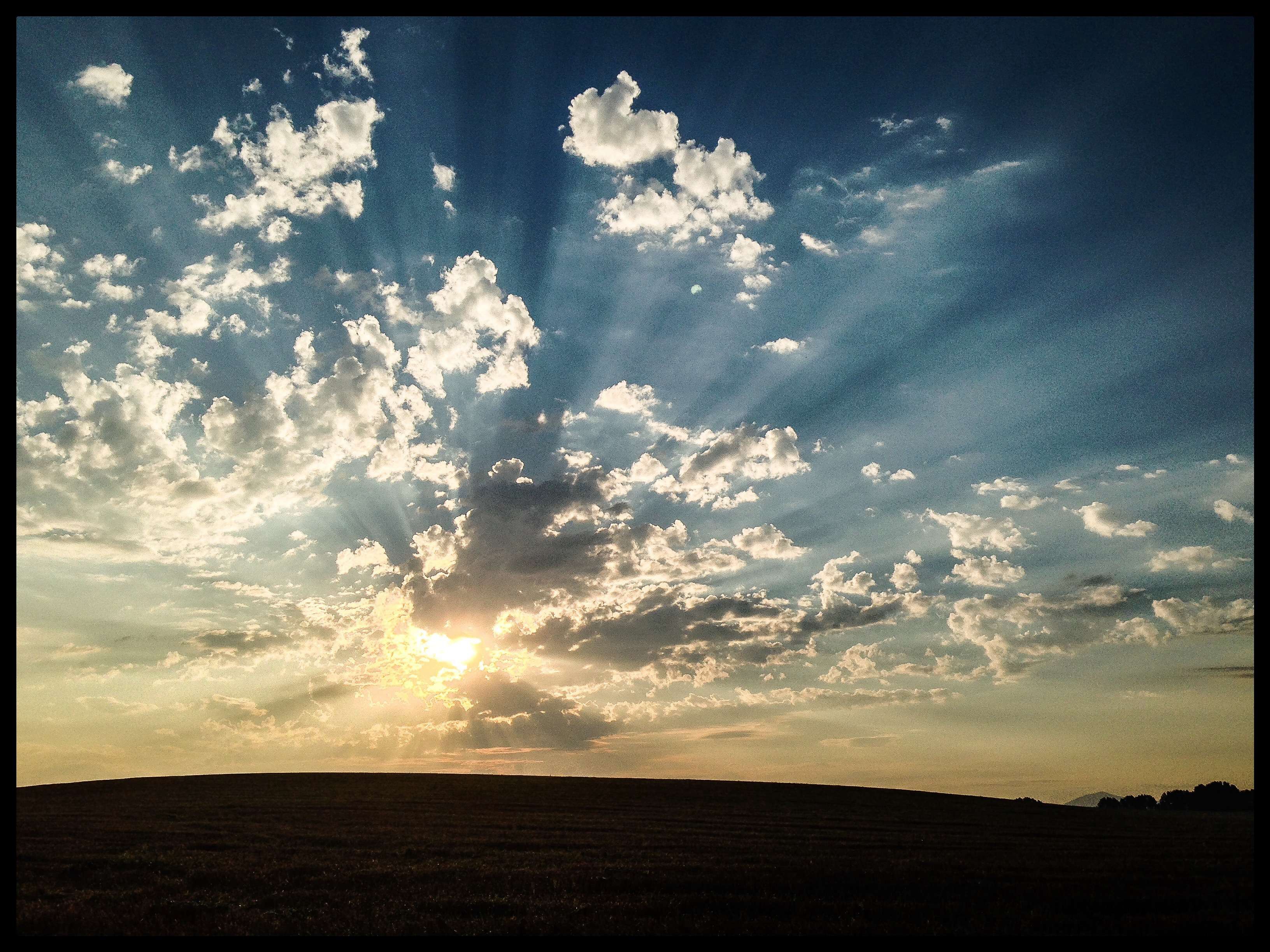 There are always some great sunrises on El Camino

It is undoubtedly the most popular walking trail in the world. Last year alone, according to the records kept in the finishing point at Santiago Cathedral, some 120,000 people took it on. And that was just those who bothered to register their adventure.

The first day is a baptism by fire. The Camino spirals up from St Jean along a route chosen by Napoleon and his troops who entered Spain and is now known simply as the Route Napoleon. The 13 mile, 4,160 feet climb has many walkers, or pilgrims as they are affectionately known, doubting their sanity from day one. In fact many drop out on the climb fearing this first foray onto El Camino is a taster for the rest of the route.

It isn’t. Reach the summit at the Col de Lepoeder and the way descends down to Roncesvalles, after which the hardest part of the Spanish section of the Camino Francais is done.

This is my third time on El Camino and the climb up never disappoints. Look back occasionally and the Pyrenees rise up majestically through a low lying mist brushed across the valley. As the sun climbs into an azure sky it paints patterns on the clouds and the shadows recoil. The dark greens of the Basque countryside gradually lighten. Dogs bark, cow bells toll as a steady stream of pilgrims wind their way up to the top. 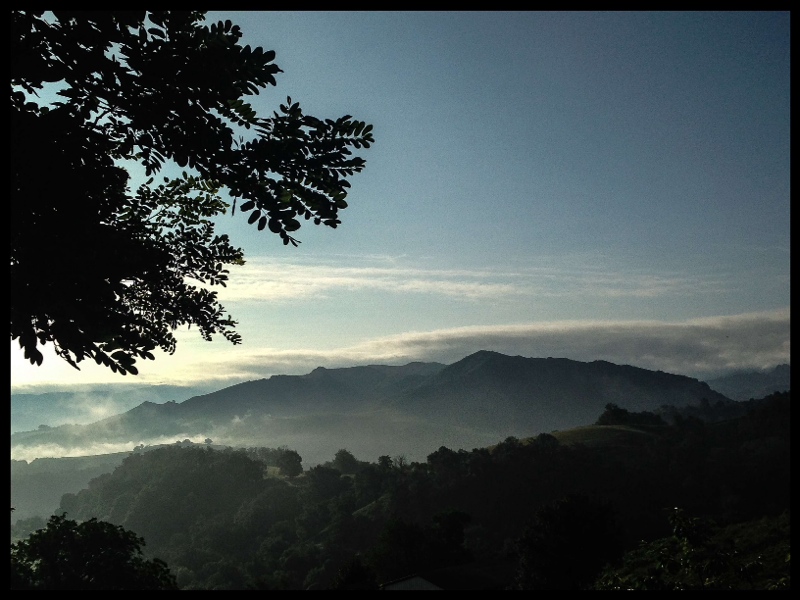 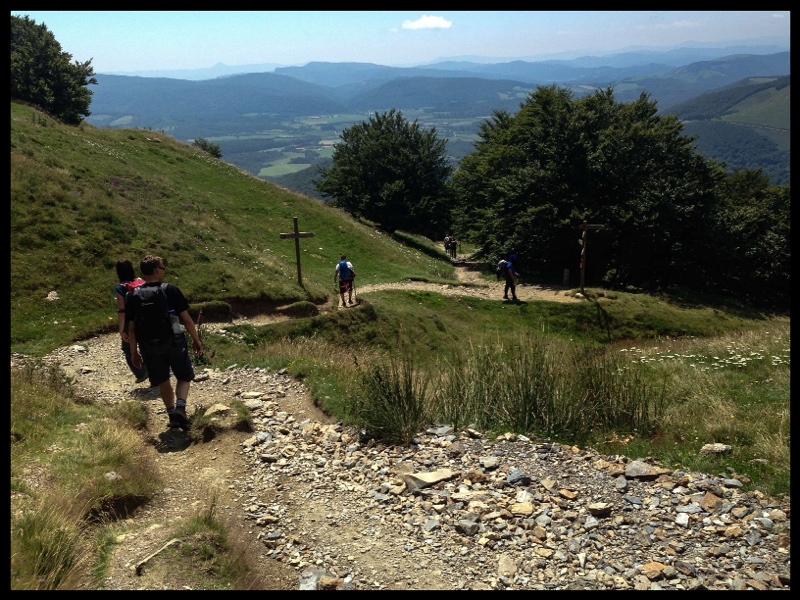 Coming off the Col de Lepoedor

After the Col de Lepoedor and after some 16 miles the way plummets down and arrives in Roncesvalles. The Augustine Abbey founded in 1130 dominates the valley and can accommodate 180 pilgrims in a purpose built wing and a further 120 in the old monastery itself. When I first walked El Camino in 2002 I stayed in the old building and although historic, charming and wonderful to roam around, it doesn’t hold the best of memories. Everyone was wet from the climb out of St Jean and the room was reduced to a musty, sweat filled sauna. I won’t even get onto the snorers.

After the lush, vibrant greens of the French countryside, it always amazes me how quickly the scenery changes once in Spain. Over the course of a fee days, the scenery merges into what one might typically expect. The greens melt in browns, the soil becomes parched and crisp and further still along El Camino, it starts to resemble a Mexican landscape. 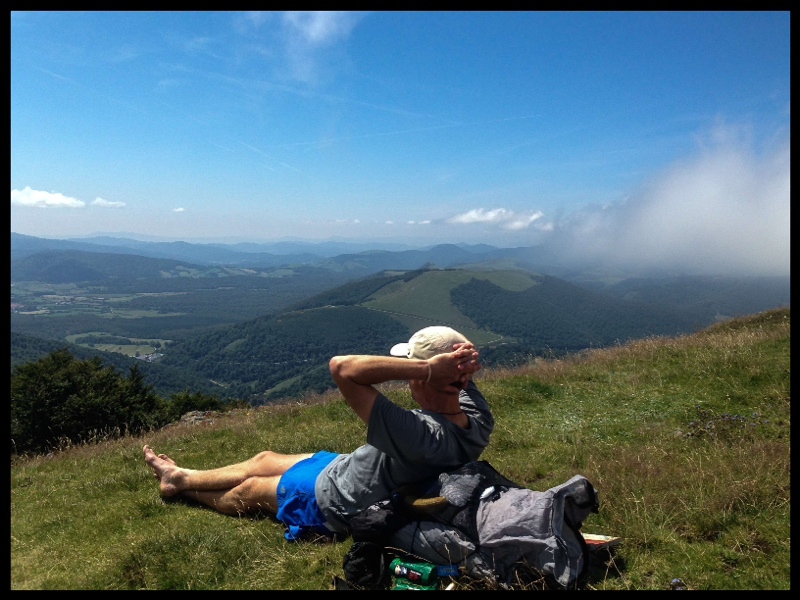 However, much of the section from Roncesvalles still revels in greenery. Wonderful, shaded woods and forests temper the mid-day inferno and provide a sorely needed respite. Temperatures in Spain already are in the high 20’s and I cower under sunglasses, a hat and several very generous layers of factor 30. I actually don’t mind the heat, somehow I always manage to deal with it although my sweat streaked t-shirt confirms that perhaps light grey was not the ideal choice for hiding the perspiration.

I passed through Roncesvalles and after only 16 miles the legs have plenty of life still left so I carry onto 25. Through Auritz Burguete, making sure I take the right turn off the main street which is easily missable. Skipping over a few, crystal clear streams and after a short section in the open, I relish returning to the shade. Having forgotten to fill up on stove fuel, I stop for a meal in Aurizberri Espinal and nearing early evening, my legs began to tire before I pull of the trail, staying secluded behind a hedge where I pitched my tent out of sight. 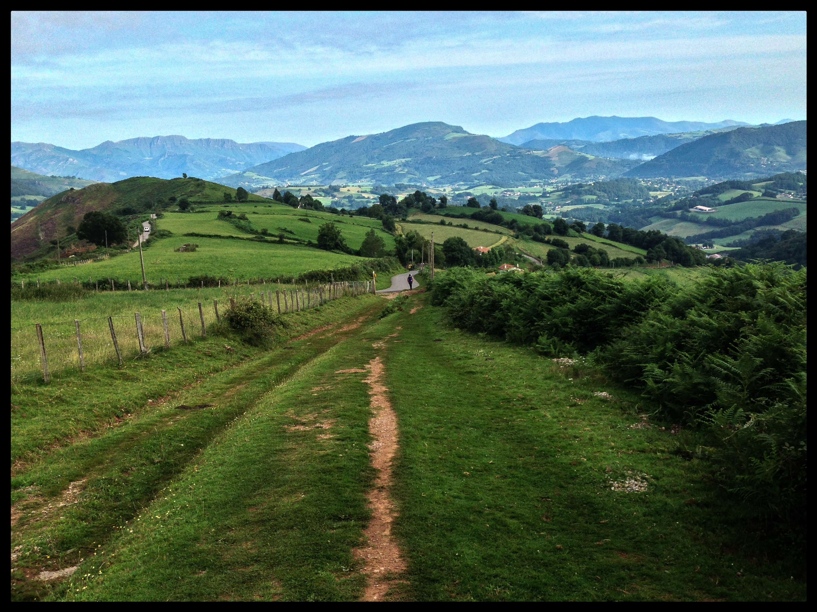 I awake from the sound of boots on gravel early the following morning. It’s not unusual for pilgrims to be marching from 6am onwards but for most, between 7 and 8 is normal. The sun rises later down here and it isn’t until gone 7am that my surroundings are bathed in sunlight. My tent is wet from an early morning dew, I would normally camp in the woods where the trees take most of the moisture but I was tired and a field offered the first opportunity.

A bar in Zubiri welcomes me in and I devour my favourite Camino breakfast, a cafe solo, fresh tortilla (potato omelette) and bread just in from the bakery. Good protein, carbs and who needs an excuse for a coffee?

True to form, Spain is hot. Dam hot in fact, 30 degrees C today. I slap on some factor 30, manoeuvre the flaps down on my Sahara hat and pray for water. El Camino never really let’s a pilgrim down on the refreshment front. If you have a filter then there are plenty of streams and rivers but if you don’t, water fountains seem to pop up at just the right time. I always down a litre so it starts to work straight away, then take another litre with me. My arms glisten with sweat, my t-shirt blotches and I taste salt. 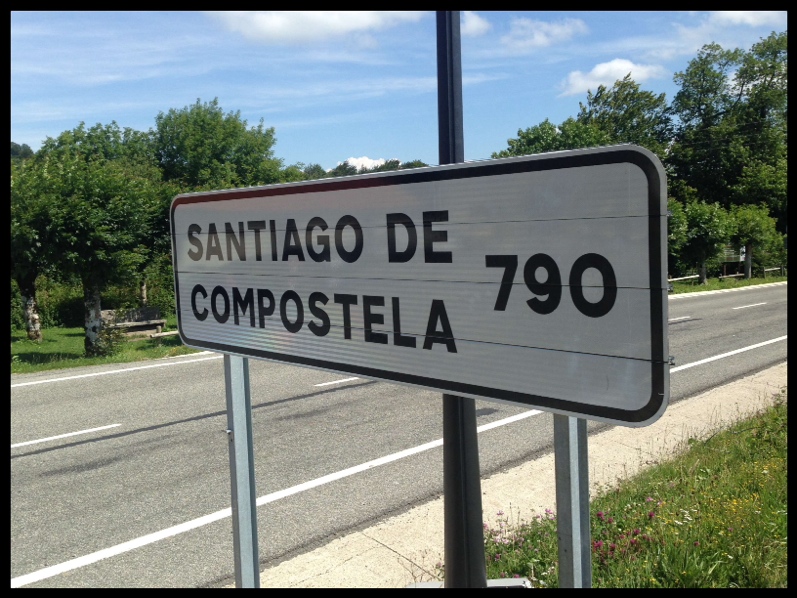 It is August after all but I have not walked El Camino this early in the month, both my previous visits in Spain were in the latter part of September. It does have the disadvantage of being hot but consequently, pilgrim numbers are down. The popular months for a pilgrimage are early in the year around April and May because of the cooler temperatures but September is the most popular. Out here now in August it’s relatively quiet, the refuges have spaces, the trail isn’t crowded and it’s an experience I’m enjoying.

Before I know it, Pamplona’s suburbs appear. I cross The Puente de la Magdalene which for me signifies the start of the old town, and work my way up through the old, towering fortifications and through the Portal de Francia. Pamplona is said to be of Roman Origen dating from the 1st century BC. Famous for the running of bulls festival which sees people literally fleeing for their lives from a hoard of rampaging bulls every July, Pamplona is a wonderful city. 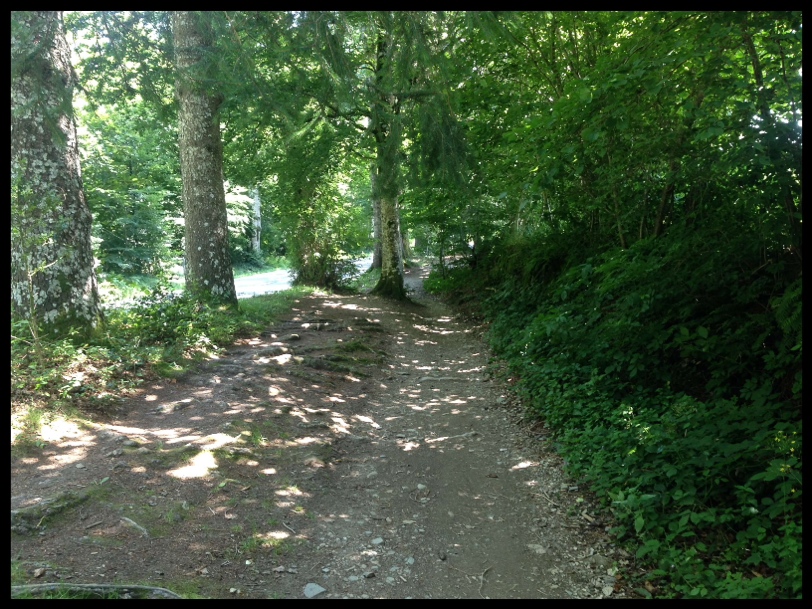 Typical of Spain, the buildings are tall and the streets narrow, creating abundant shade and dropping the temperature a few degrees. Tapas bars, cafés, restaurants and pastel coloured frontages adorn every street. Hemingway’s Bar in the Plaza del Castillo dominates and the interior is a coffee lovers delight. Conversation amongst the tourists is subdued as they simply glance around the wood panelled, mirrored interior in awe.

Alas, I am not stopping. Cizur Menor is my destination, a further mile from Pamplona’s suburbs. The Albergue there run by the Order of the Knights of Malta promises a comfortable bed, shower and use of the kitchen for a mere 4 Euros. I sleep soundly, for once, away from the noise of the city. 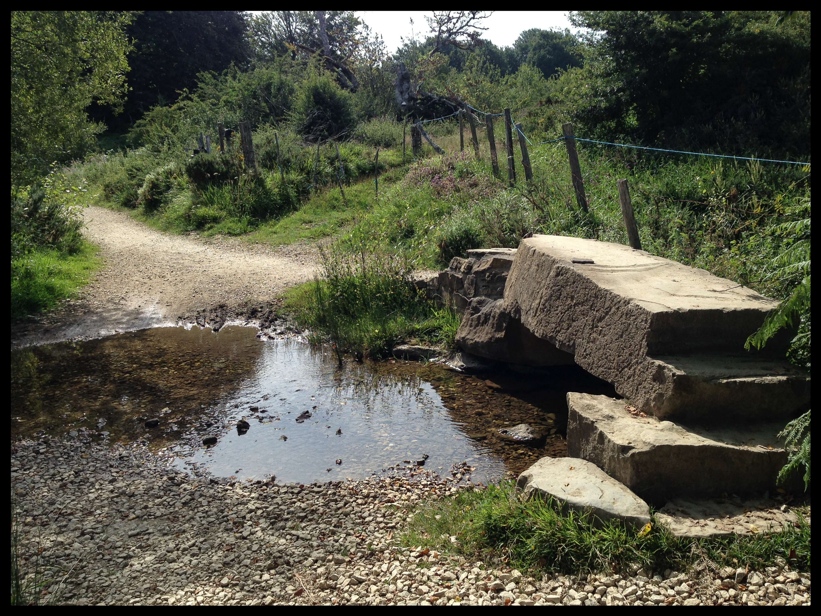