The roller coaster, the rewards of hardship, undressing Scotland and back on the Appalachian Trail. 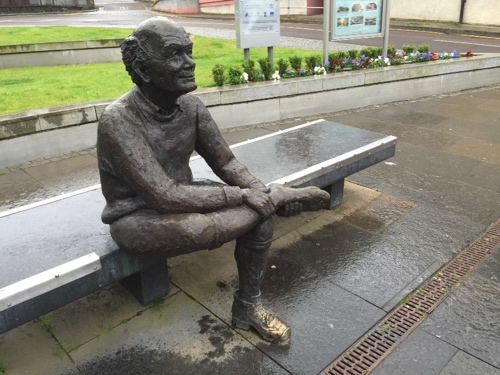 Start of The West Highland Way in Fort William
The West Highland Way is one of the most popular walking routes in the country. Not even high midge season appears to have held back the crowds and soon after leaving Fort William, it was clear the route would be busy.
I’d been sucked into the Cape Wrath Trail, knocked around a lot, and after just over two weeks, was spat out the other end looking somewhat dishevelled. A little battered, I needed a trail to relax on for a while. I was fed up with wet feet and wondering where the trail actually was.
As if hearing my wishes, the West Highland Way took me under it’s wing and for just over four days, allowed me to wander down to the finish at Milngarve at my own leisure on decent, well marked trails with several opportunities to get a bite to eat and something to drink. 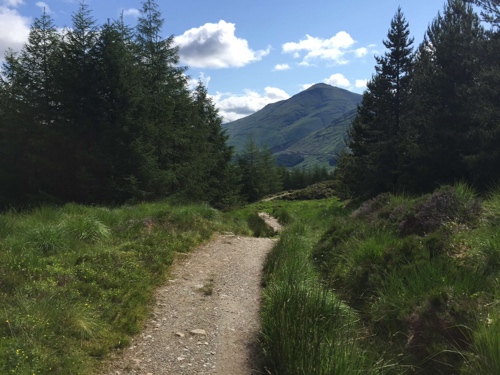 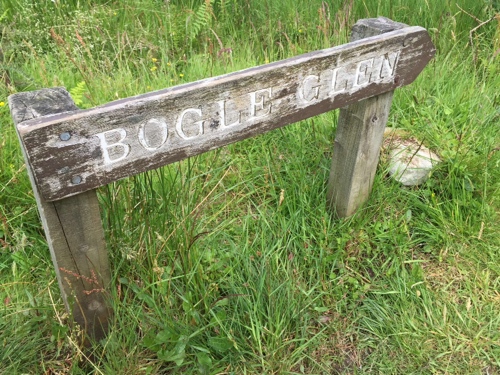 It has quite the reputation for hard hiking but it’s a big softie really. There’s some stiff climbs but nothing the average fit walker can’t take in their stride.
The added bonus was the weather. Occasional rain fell on day one but after that I enjoyed perfect summer skies with warm temperatures.

Making good progress on day one I intended to make camp in the col between Stob Mhil Mhartuin and Beinn Bheag but there was little flat ground, and as usual it was water logged. I descended the Devil’s Staircase and seeing some tents halfway down I hoped there was a little space left. Alas, I ended up at the bottom of the staircase near the main A82 road with little choice but to find a flat spot within a stone’s throw of the road. Not ideal but I was too tired after twenty two miles to go any further.
I woke to low clouds and a mist intent on staying put but slowly, over the course of a couple of hours it started to lift. Peaks appeared around me as I squinted through the brightness, my path ahead showed itself and gradually, Scotland undressed itself. 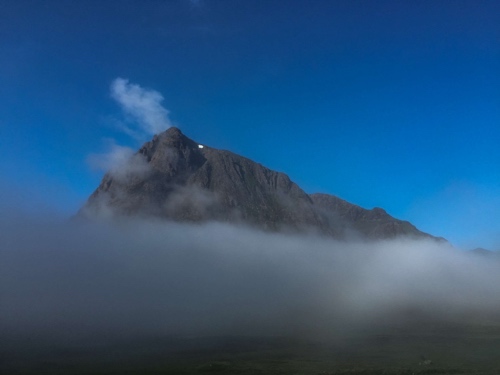 A misty start to day two but gradually Scotland undressed itself.
What followed was two days of glorious weather. The sun came out to play most of time, tempered by the occasional picture perfect white cloud drifting lazily across the landscape.
The highlight was Loch Lomond which glinted back at me as I worked my way down between Troisgeach and Ben Glas. I hit it at 2pm and didn’t leave it until the same time the following day.
* * *
The Appalachian Trail had been on my mind for a day and it wasn’t difficult to figure out why. If the geologists are correct, and America and Europe were once together, it seemed nothing much had changed since the separation.
For that day along Loch Lomond, I could have been on the Appalachian Trail. The similarity between that corner of Scotland, and the State of Maine in the north east States was undeniable. 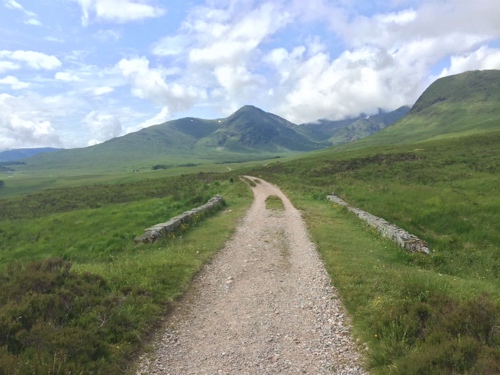 What is left of the forests in Scotland mirrored my memories from Maine. Even the lochs, cupped into valleys, their water almost black at some times of the day, were strikingly similar. Nearer the shore where the waters shallowed, the black lightened to a peaty brown which coloured the stones and pebbles underneath into shades of bronze, and at times even gold.
The trail was coated with Pine needles, occasionally revealing the dark soil and rock poked out of the ground as if coming up for air.
Looking back to 2012 and my time on the AT, especially the last month, I could have been in Scotland. And, during the latter stages of the West Highland Way, my whole environment matched Maine and for a day I was back on the Appalachian Trail, in my imagination at least. 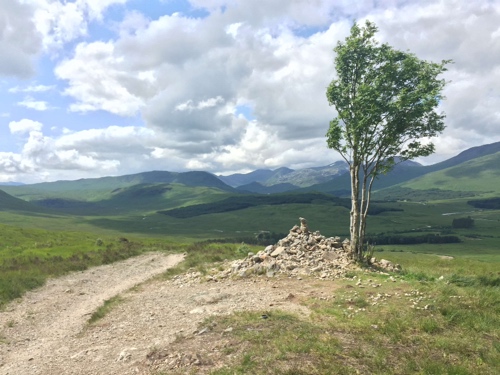 Comparing the two trails, Cape Wrath and the West Highland Way, you would think being in the same part of the country they’d be similar propositions, but they’re not. The Cape Wrath Trail, as I’ve been told, is in fact not really a trail at all. The vast majority is trudging through a water logged landscape with no discernible route to lock onto. Navigation has to be spot on, decisions such as taking on a high route have to be weighed up looking at the weather and time of day. There are no signposts, well, I saw just one the entire route, and camping spots are rare due to the soaked soil and uneven ground.
The West Highland Way is similar in terrain but the trail is well marked, smooth, lovingly maintained, and the opportunities to stop and grab a bite to eat are numerous. It’s popular so they’ll be plenty of other hikers to meet, unlike Cape Wrath where I saw a total of ten hikers in 240 miles.
I was asked the other day whether coupling both trails together would be a good idea, and if so, would I start at Cape Wrath and head south, or begin at Milngarve and head north? Heading north a hiker would be eased gently into Scottish terrain and weather, having 96 miles to warm up on good trails. Then, the going would be difficult all the way to the Cape after Fort William. 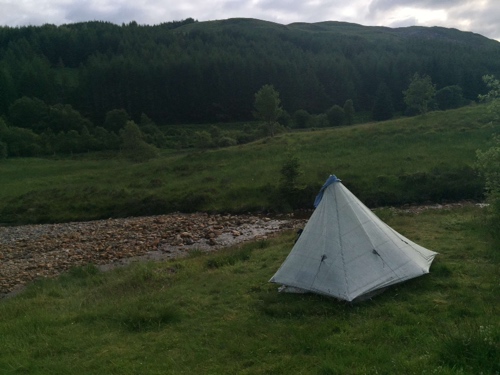 Personally, if I did the trails again, I’d go the same way, southbound. For two or three weeks you may well curse the decision, and me, and the Cape Wrath Trail itself. However, this is the whole point behind the adventure. A certain amount of hardship has to be expected but the rewards are suitable compensation. That North East part of Scotland is wild, remote, with inclement weather and midges but what the eye sees, what a hiker experiences will stay embedded in a special part of the memory for the rest of their lives.
At times the scenery beggared belief, unable to comprehend what I was looking at on several occasions I was rooted to the spot just turning in a circle, digesting my surroundings and thankful for having the chance to be there.
Reach Fort William, perhaps satisfied but also slipping a sigh of relief, you would then have just shy of 100 miles on the West Highland Way to coast South, take it easy, and take advantage of the amenities on offer. 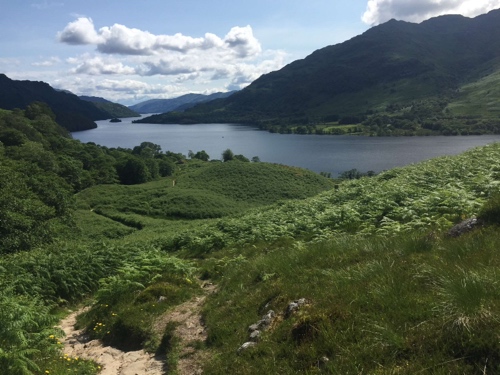 Loch Lomond.
Think of a south bound hike on both trails as a roller coaster ride. You get thrown in at the deep end, otherwise known as Cape Wrath, right at the top of the highest plunge. There’s no trundling along for a few minutes to take it all in, get in the car at the top of the ride and release the breaks for the thrill of your life, and you’ll struggle to get off, even though you wouldn’t want to. Then, the roller coaster mellows, the bends become kinder, the speed drops. Coming off the final drop, you ease down to a flatter section and gradually slow to a satisfying stop.
* * *
Next, heading on a rough east – south – east bearing from the west side of Scotland to the east to hook up with the Pennine Way. The route took me along canals, on quiet B roads, old drove roads and through delightful villages to my destination at Kirk Yetholm. 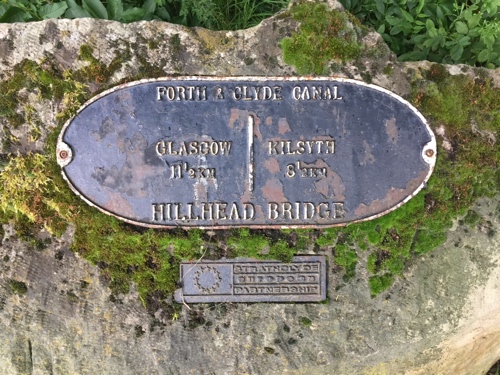 I haven’t indulged in any in depth planning for this hike. The only certain aspect is a north west to south east bearing, taking each day as it comes and calculating the route as time pans out. It’s how I wanted my hike to be, generous in the freedom of where to wander, with few restrictions and to follow a route that seemed like a good idea.
So far at least, things seem to be working out nicely.
Edited with BlogPad Pro