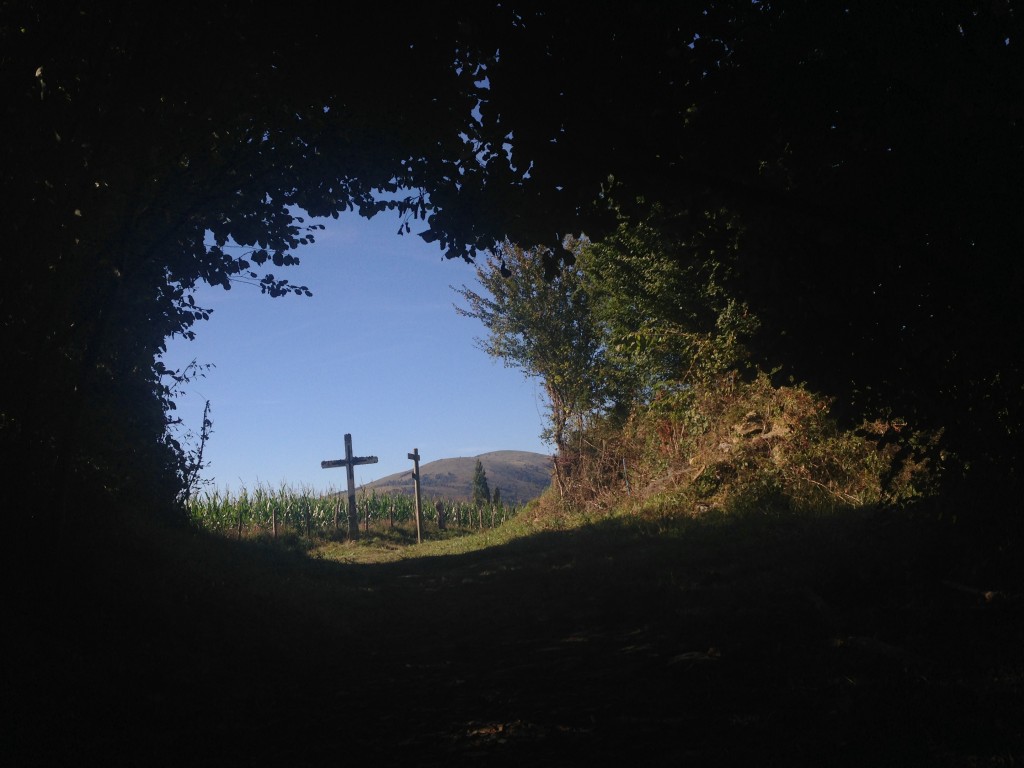 Lectoure straddles a high ridge commanding a prominent position, as do many French towns. A throwback to the times when wars and battles were every day life. Many places sit high up, with clear lines of sight to the surrounding countryside. Old, fortified city walls dating back centuries still stand proud, reminding us of less peaceful times. My last time in Lectoure stretched to 2 days nursing an injured calf, this time it was an overnight in the presbytery with a smattering of other pilgrims. We enjoyed a great evening meal with the Priest in attendance, joking and sharing a little red wine.I left early, glancing back to Lectoure cathedral with the light slowly moving down its east walls. I descended down to the flatter lowlands and vanished in a forest of mist. The air was still, everything sparkled and glistened. The roar of burners slowly inflated 2 hot air balloons signalling another potentially fine day. A church spire broke through ahead of me, the bells chiming 8 o’clock as shoes crunched along a sandy track. I crossed over a river and slowly the sun started to break through my eerie surroundings. 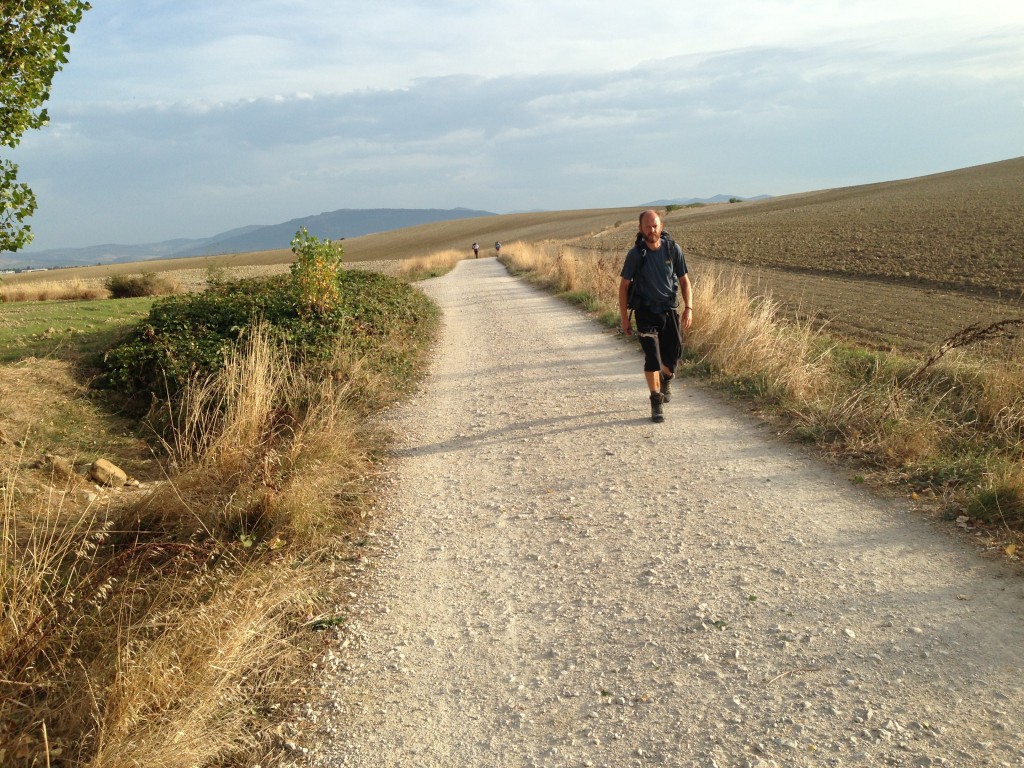 Walking with Patrick from Belgium

The first signs of autumn are arriving. Nights are cold, leaves rustle as I kick them up ahead of me and slowly greens are gradually fading to shades of auburn. There is talk of a late summer with temperatures soaring to the high 20’s. After the initial first 3 weeks walking in a searing sun a few days of rain will actually be welcome.I stayed overnight in Aire-sur-l’Adour, a slightly less charming town than the flag adorned bridge I crossed over might have suggested. A drizzle trying to decide whether to stop or start continually toyed with me all day as I walked along quiet country lanes hemmed in by maize fields towering above my head. I passed the occasional pilgrim resting and grabbing a snack under whatever form of shelter they could find. Menacing clouds swept across the sky and an occasional waft of wild mint rose up from the verge. 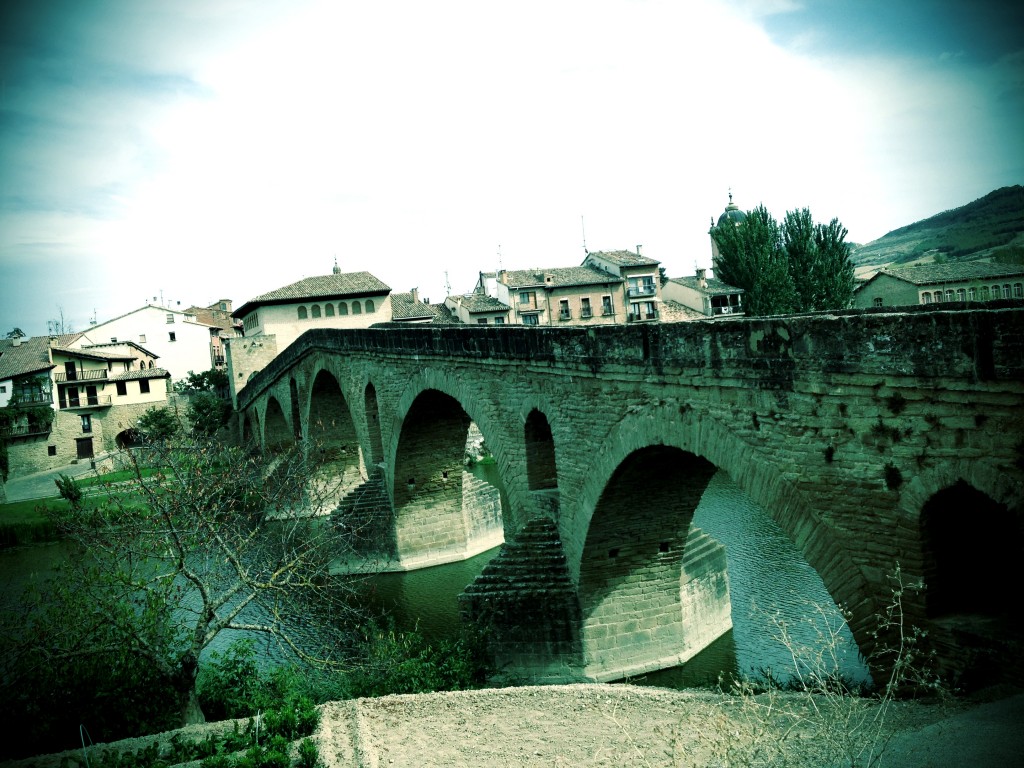 El Camino is one, big food larder at this time of year. The fruits of the summer have ripened and I pick at the occasional apple, pear, fig or plum. Walnuts crunch under my feet and sage, rosemary, thyme supplement a meagre pan of rice. Raspberries, blackberries and rose hips provide sweet deserts. An occasional, abandoned vegetable patch also offers up tomatoes, potatoes and perhaps a pepper or two.The way could never be classed as remote, as wild as it gets here would be perhaps 15 miles with no village or town to pass through. When they do arrive the hunger pangs strike and a cafe will serve up either a coffee or cold drink accompanied by a snack to stave off the food craving until evening brings a more substantial offering.I carried on through sticky mud that clung to my shoes, my legs feeling the extra weight. Leaves and slick rocks hampered the way and all I could hear was the patter of water against my umbrella as I weaved around puddles. As hot as it had been and as much as I sought a little rain , I longed to glimpse the sun. 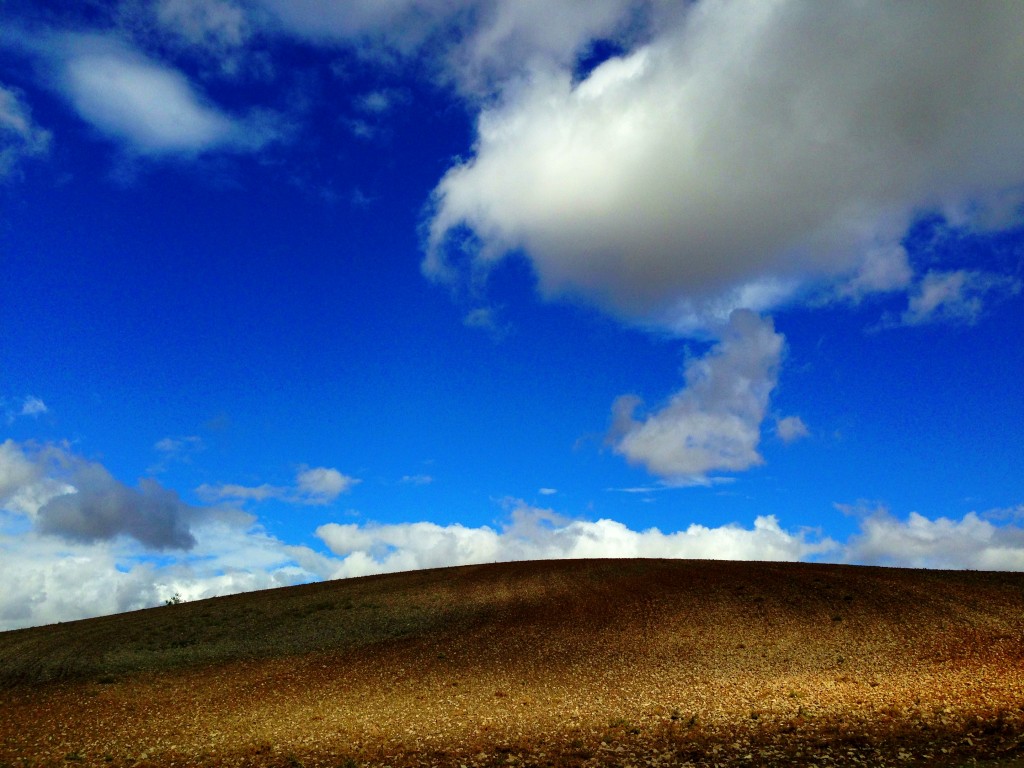 I have walked in the company of Thomas from Switzerland for a while who proved excellent company. Long conversations involving food, a favourite hiker topic, had us salivating by the time we hit town. Truffles, mushrooms, perfectly cooked steaks, moist fish and the dishes of France and Spain were discussed in depth. He is due to finish near the Spanish border as he already walked through the Spanish section some 5 years ago. I see familiar faces most days, some who I have known since the start in Le Puy en Velay, some I met only yesterday. Pilgrims come and go, some slow down never to be seen again, some do longer days and I may not see them for weeks when perhaps they take a weekends rest. I remembered the village of Ostabat-Asme from my last walk. Today it is a small, unassuming place with no noise except the occasional car passing through but in medieval times it was an important spot. Various routes from around Europe converged here and in its prime it could accommodate up to 5000 pilgrims. From here I had a mere 14 miles to perhaps the most renowned settlement on El Camino – St Jean pied de Port.St Jean sits in the foothills of the Pyranees mountains. It marks the end of the French section and a half a few hours spent grinding up over the mountains sees pilgrims cross over into Spain. It is by far the most popular point to start El Camino, made even more famous recently by the film ‘The Way.’ I arrived mid afternoon with Thomas and Florence, both of whom would finish here and catch trains back home the following day.I passed under the Porte Saint Jacques and walked steeply down the Rue de la Citadelle. All the new arrivals were strolling around in their new hiking apparel looking for accommodation. Some rudely bashed their packs into me as I took a coffee, the streets were alive with virgin pilgrims. Some will not last 2 days, the steep climb of of St Jean pied de Port will end any resolve they may have. Others will last perhaps a week but the majority will walk on, nursing sore legs, blisters and aching shoulders to arrive at Santiago de Compostella some 4 to 6 weeks later. Irish, American, German, Welsh, Swiss and more have turned El Camimo, for a few days at least, into a busier proposition. 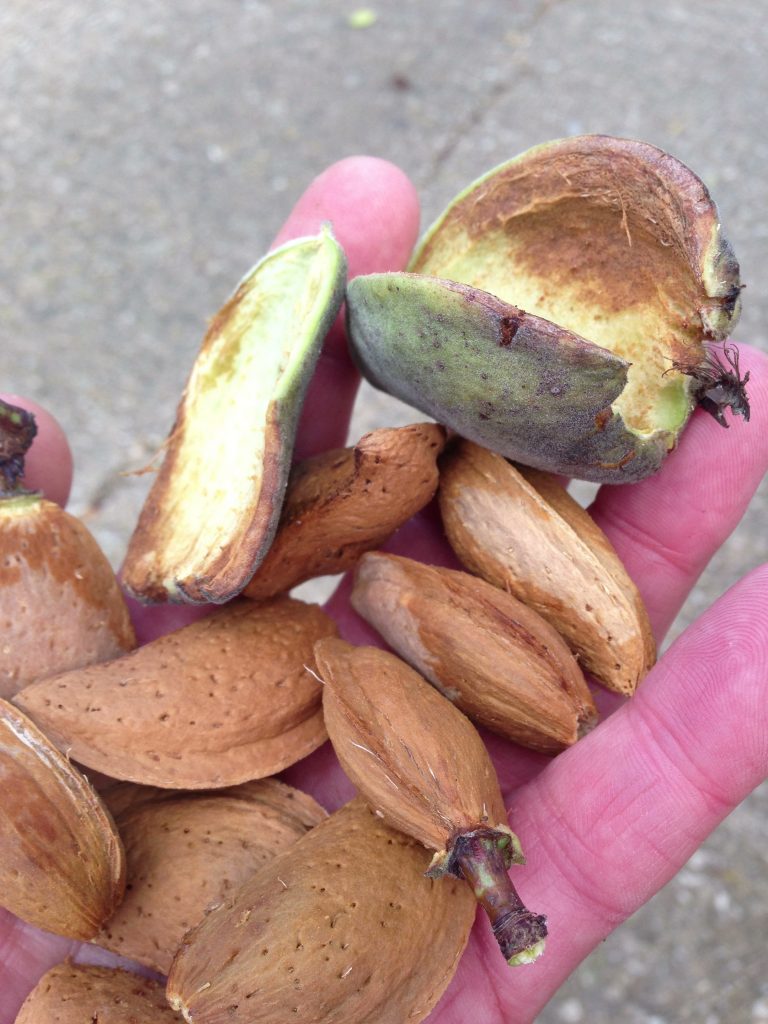 I sleep in my first refuge near the town entrance. These are more basic accommodations than the Gites I have been staying in. My last experience of them was poor; stuffy, dark rooms, hikers crammed 20 or more into dormitories in bunk beds sometimes towering three high. Snorers (myself occasionally included), grunters, people tossing and turning and light switches clicking on at 06.30am saw my nights spent camping increase and I feel the same escape coming on more now. Despite their reputation, 5 or so Euros will secure a bed for the night, a shower and a roof over my head which is all I can ask for.I left early the following morning, eager to get the 18 or so miles over the Pyranees under my feet. It was still dark as I worked my way through the quite streets, the restaurants and cafes still shyly shut. The moon offered  a weak light, reflected in cobbles and on the surface of the River Nive as I crossed the bridge and started to climb up the Rue d’Espagne. A few other pilgrims straddled the road ahead of me as slowly the sun emerged from the Pyranees to the east. 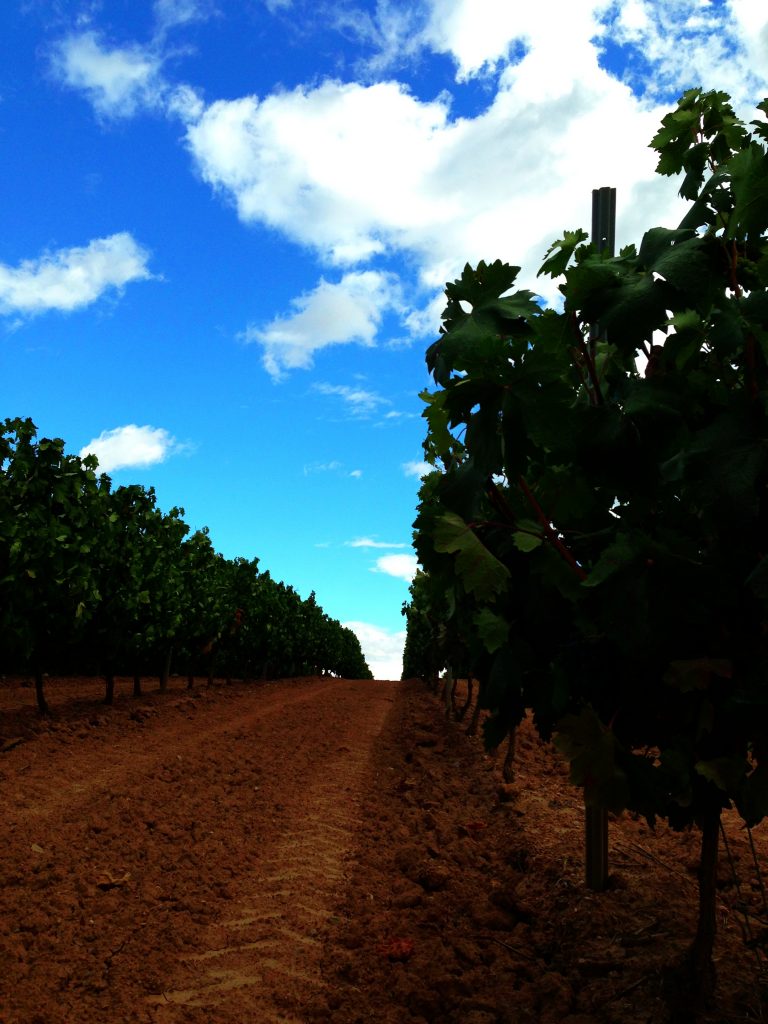 Last of the summer vines

I climbed for 5 hours, glad of the cool mountain air and finally reached the Col Lepoeder. I sat on the grass and ate some lunch whilst looking down the valley and the rooftops of the monastery at Roncesvalles, the first settlement in Spain and where most pilgrims would spend the night. An hours walk steeply down and I arrived at 1.00pm, too early to stop there so after a little refreshment at the bar I carried on, passing through Auritz. At 4pm I stopped, nipped under a fence into the woods and set up camp. My last experience of the Monastery was poor, packed dormitories and stuffy air resulted in little sleep, an experience I did not want to repeat. After all, the woods beckoned, and they´re always hard to refuse.Spain is already different to France. The changes like the cuisine, drinks, architecture are obvious but there are others. It is much drier, the signs of autumn are stronger, the ground is covered in crispy foliage but in contrast my surroundings are still green. The trail is dusty, stony and I cross over small water courses, some dry, others flowing with crystal clear water and vibrant green plants caught in the waters flow. Forests and woods provide welcome shade as I make my through natural tunnels, a faint glimpse of bright light getting closer as I break out to a searing sun for a mile or so, returning to the cool again. Vast vistas open out before me, panoramas stretching away to a distant hotizon over a parched and sometimes barren landscape. Crest a hill and stand in awe as El Camino can be clearly seen as a sandy line against a red soil, winding left and right, rising and falling and joining up a line of hamlets and villages. A giant map laid out before me plotting my route.

France already holds wonderful memories but now I have new sights to tuck into a corner of my memory. Spain is waiting to provide them. 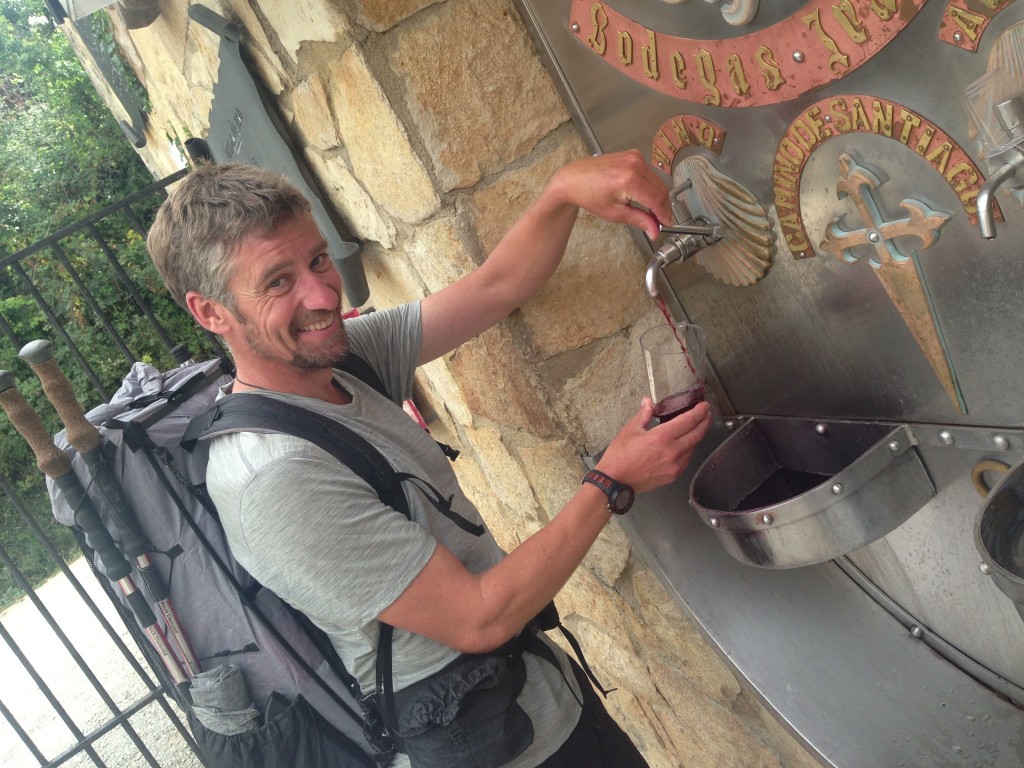 One of the Spanish wine producers actually dishes out free wine !