From Grants, New Mexico, to the end of my hike.

There wasn’t much going on in Grants at 6am. I walked out of the Motel and glanced skywards, weak moon light and the beginnings of sunrise back lit ominous looking clouds, as they had done since my start four weeks earlier. I was grateful for the lack of wind, early mornings seemed the only time for a respite until the afternoon when gradually they increased in intensity once more.
I couldn’t resist breakfast to fuel up for the thirty miles I had planned.
“It is unusual yes,” offered the guy sitting near me in Dennys. “Never seen this much rain for this time of year. Weather patterns are all over the place.” 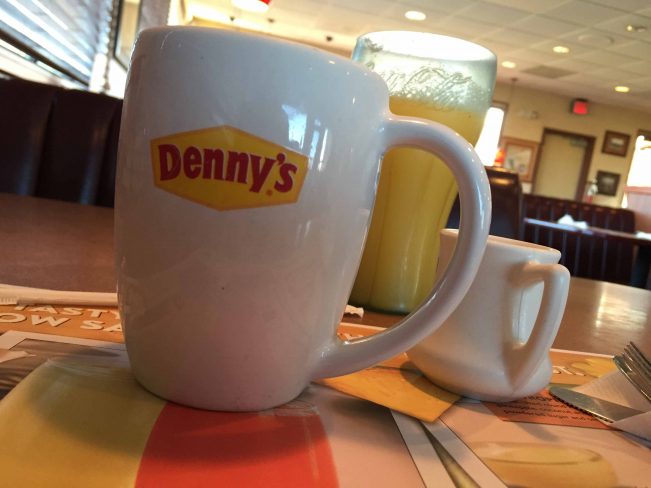 I left and made inroads north through Grants Main Street, watching New Mexico wake up. Cars queued at the drive thru for breakfast, a solitary cleaner brushed the sidewalk as the street lights flicked off.
I took a right turn on 1st Street, longing to be out of town and back in the wilds. W. Roosevelt Avenue signalled my next direction change and after a final left turn onto Lobo Canyon Road, the bustle of town gradually faded and the houses slowly gave way to the familiar dry scrub I was used to.
Following the road, the trailhead appeared an hour later and I climbed gently, glancing back at Grants spread out like a giant map beneath me. 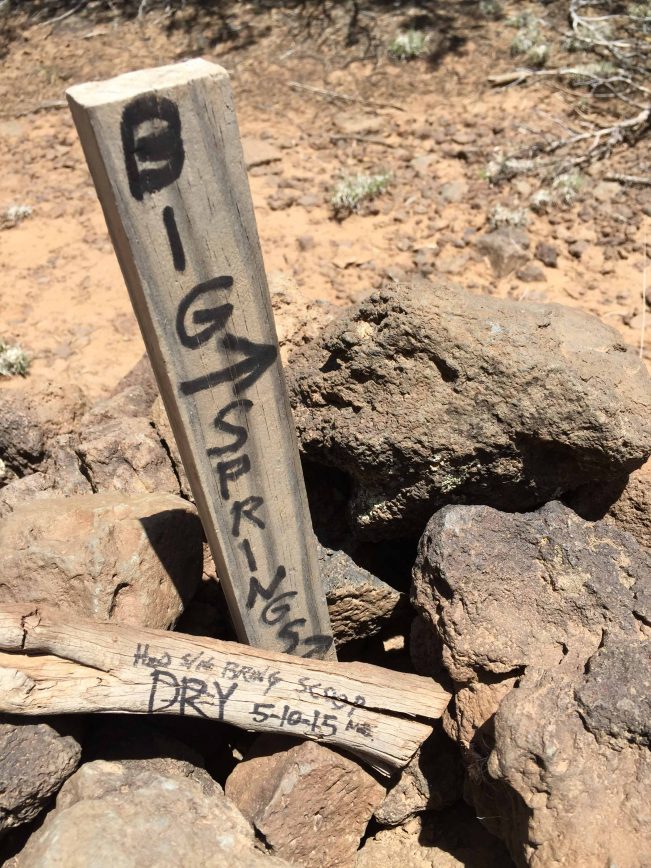 I saw no one the entire day and skipped between open, flat areas before pine forest beckoned me into the shade, and I listened to a gentle breeze weave through the branches. Save the occasional bird call, my world was quiet, tranquil, at ease and gave little indication of the situation I was due to face the following morning.
Pushed for time, and needing to reach Cuba before the Post Office closed on Saturday morning, I ignored the turn off for Mt Taylor and took the diversion which skirted it’s western flanks. I knew Bear Claw, Grim, Nom Nom and HoJo were up there somewhere as they had left yesterday. I wondered if I’d cross their paths later.
Eventually the ascent topped out. Clouds skimmed the trees to my left, yielding to shafts of sunlight. I paused, debating a quick break but decided to descend a little for the air to warm. I flew downwards, clawing back some distant robbed from the slower uphill section. The trees parted occasionally to wider, open areas as I fumbled for my sunglasses. 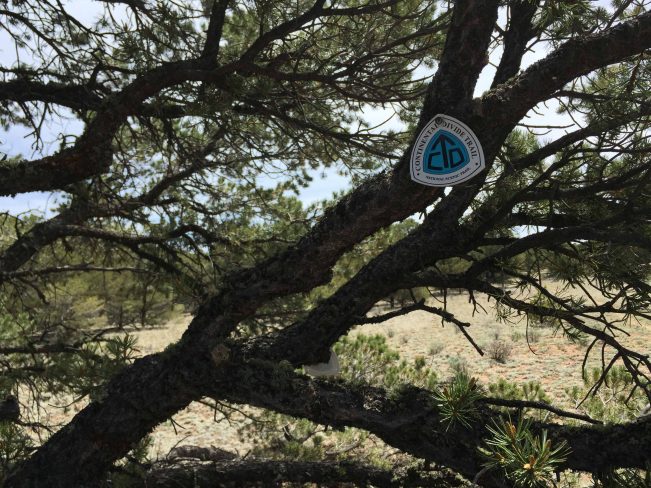 I passed ten miles, then fifteen, twenty, twenty five and pushed on for my thirty. At thirty one miles and seven in the evening I began looking around me for flat spots suitable for camping. Arresting some momentum on a steep downhill, I jumped over a small creek and before the trail rose once more, a level area beckoned to my right. It was a great spot, a couple of fallen logs offered a seating perch, and the trees thinned a little, lending some late sun to my surroundings.
I put up the tent quickly as a few dark clouds threatened, blew up my air mat, fluffed up my sleeping bag and settled down to cook. Sipping on some welcome tea, my Mexican Rice finished hydrating and as I gingerly lifted the pot, my grip faltered and half the contents ended up on the forest floor. I scraped up what I could, and hoped the remnants didn’t act as a general invitation for any bears roaming the area.
As I shut me eyes, bears would have been the last of my worries. Excited at the prospect of reaching Colorado in a couple of weeks and ticking off New Mexico, little did I know that in just twelve hours I’d be off the CDT for good. 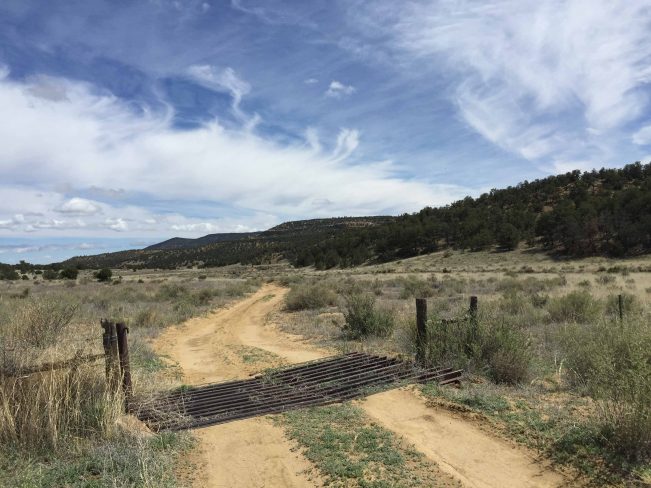 Cuba was still seventy five miles away, needing a further two, thirty mile days and a little fifteen miler on Saturday morning to reach the Post Office. I was packed up, digesting some porridge and on my way by six again.
By seven my chest was hurting, worryingly around the area of my heart. Not only was I concerned about the pain, but also the fact that Grants was now forty miles behind me, and Cuba was still a further seventy. I looked at my phone, which, almost mockingly, advised there was zero hope of reception. I blamed a likely pulled muscle or perhaps warming up twinges.
Over the course of two hours the pain increased until finally I had to stop. My breathing had become shallower because it hurt when I took deep breaths and the pain wasn’t relenting so I sat and looked at the options. At that moment HoJo appeared, who I had started the walk with. I was convinced he was at least twenty miles ahead of me as he had left Grants the day before.
We discussed the options calmly and concluded quickly that I was I no fit state to walk anywhere, that chest pain shouldn’t be taken lightly, and we should call for help.
The chopper arrived about an hour later. I felt a little better as they wired my chest up, gave me oxygen, put me on a stretcher and loaded me up. What struck me when we took off was exactly how remote we were. From one horizon to the next was just barren scrub with the odd forest. No roads, no houses, nothing.
After half an hour, we crested a hill and there was Albuquerque, sudden and stretched out. 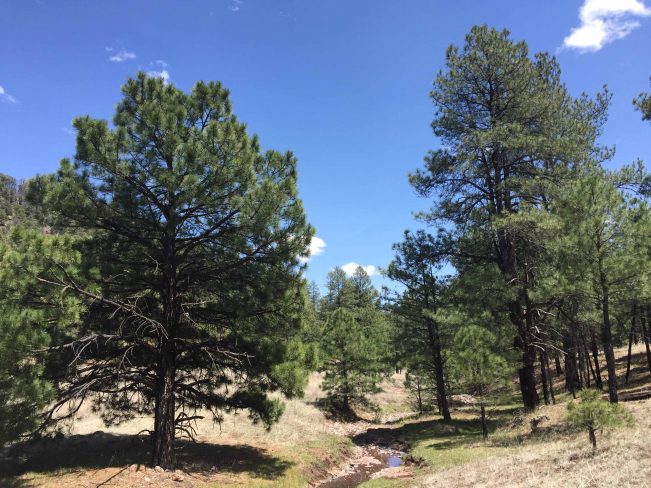 I spent the day in ER and was discharged late afternoon. They weren’t sure what the problem was but said it was likely to be bronchitis, and handed me a prescription for antibiotics.
“Don’t walk, and certainly don’t hike anywhere for two weeks. You need to rest,” were the Doctor’s parting words before I left, thanking him.
That pretty much made the decision for me to return home. Holding me up for two weeks wasn’t the end of the world, but it would have created potential problems in my hiking schedule. Two weeks in a motel would have pushed the budget too much and also I was concerned that the infection would return when I was out on the trail somewhere remote, so I decided to fly home. A sensible decision which turned out to be a wise one also as my infection was due to return. The decision, although hard at the time, was validated the following morning when I woke and felt completely at ease with it.
I wondered why, after all the planning, the saving, the anticipation and dreaming why I wasn’t upset. My chest gave me little choice in the matter but I was surprised at how acceptable the decision was. I had experienced bad days on the CDT, and to be honest there were plenty of times when I would have rather been somewhere else. I hadn’t experienced these feelings to such an extent on my other long hikes. For some reason the excitement wasn’t there. 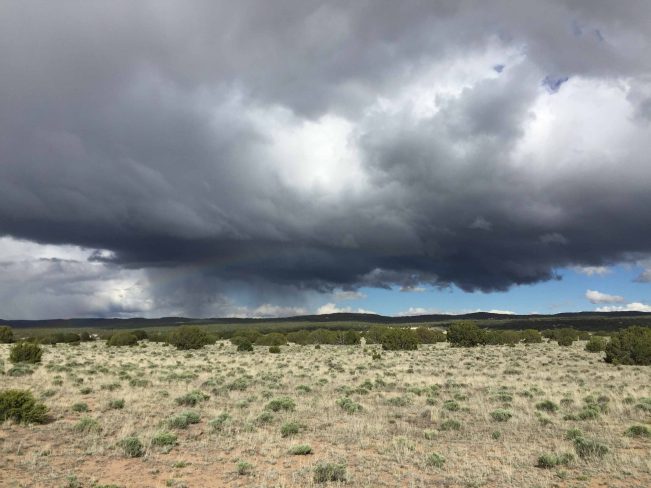 I questioned my decision to take on the CDT, to hike in desert which was a novelty at first that I soon tired off, to have to deal with the volatile weather, the heat, the cold, the wet. The logistics and re-supply were annoying me. I wasn’t feeling it, and even now, sitting back at home, I don’t know why I wasn’t.
Maybe my days of pulling in 3000 miles hikes aren’t interesting me anymore. Perhaps America, home to some of the best wilderness areas in the world just isn’t doing it for me.
I’ve never been one to ignore feelings, as strange and illogical as they may seem at the time, and I’ve always said that if I truly wasn’t enjoying a hike then I’d get off trail. Now, back in England, I have no issues and on the contrary, it’s great to be back in this amazing country in the middle of the summer.
I’ve had check up’s since I returned as the antibiotics didn’t work. At first they thought it may have been a blood clot but after spending yesterday in hospital, both bronchitis and a clot were ruled out and pneumonia is what I have. Three weeks after leaving the trail I’m still fighting it although I believe I’m on the finishing straight. If I had have carried on after the recommended two weeks then I would have been straight back in the same position, caught out in the wild which validated my reasons to come home. 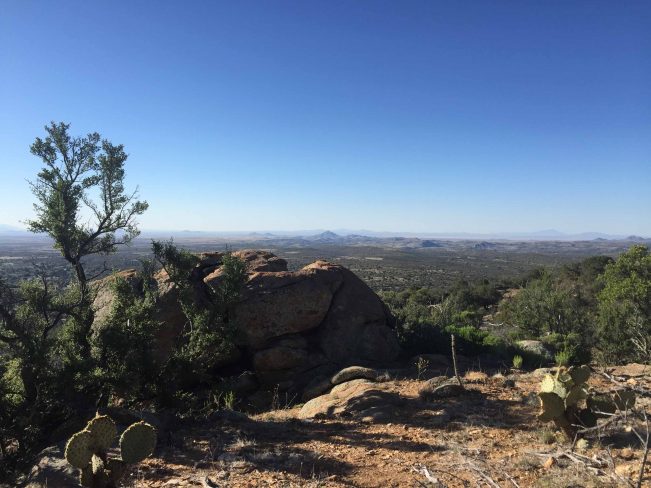 As for the next step, well once I’m back to 100% I’m eying up a hike in these fair isles. I have a rough idea of possible routes but I don’t want to plan it too much because I want to get away from ‘routes’ for the time being. This is one aspect of some hikes I struggle with, a defined path laid out in front of me, sometimes for thousands of miles. Of course I need a rough idea of direction, which I have, but I’m after more of a wander, to be free to take a left turn, despite any plans dictating I turn right.
And, I have also realised that sometimes we need not travel thousands of miles to hike, or indeed participate in any activity we love. We believe sometimes that the best stuff has to be in other countries, but it’s not always the case.
Great Britain is an amazing country that begs to be discovered, and is right up there with the best of them.
I want to go and explore it.