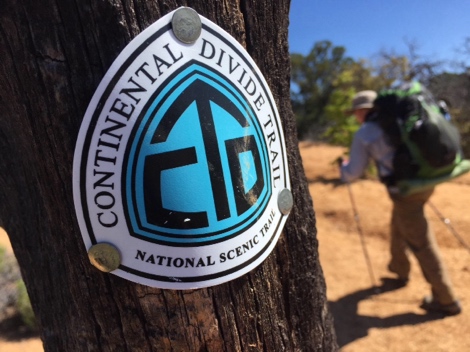 HoJo make inroads into an uphill
‘Running out of coffee on trail is a disaster of truly epic proportions.’
I do have two more videos but as usual over here, I’m struggling to upload them. I’m working on it.
The CDT is a dry, desolate, barren and lonely place up to Lordsburg. The sun has dried everything to a crisp, dust flies in my face, a fierce sun threatens to burn every part of me, and my eyes strain to pick out some form of civilisation.
However, cruel and unforgiving New Mexico may be but this landscape is gloriously beautiful in it’s own unique way. It’s the remoteness that hits me. Look in every direction and the land stretches to the horizon. I try in vain to catch the environment out by spotting perhaps a road, building, or some sign of civilisation. Occasionally I do but usually, the only concession is a dirt road stretching away from nowhere, and disappearing off to nothing.
Mountain ranges appear two days before I reach them, teasing all the time as if I’ll never arrive. Invariably, and thankfully, the trail weaves a fine thread through a small pass, or skirts around the big stuff. I have more than enough time to climb a lot of major ranges, and I relish the opportunity. For now though, breaking my body in gently, I admit to a small sigh of relief at the minor ascents and descents. 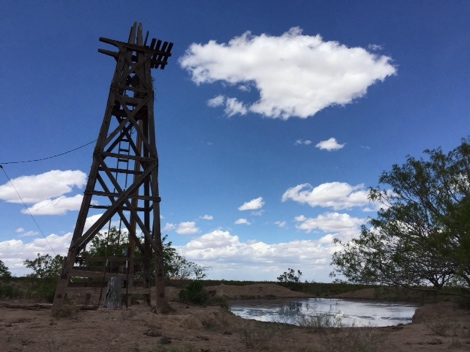 A solar wate  pump offering much needed water
After Lordsburg, despite being mesmerised by the desert, the trail has thrown in some little treats, as if apologising for a brutal start. Although it took a few hours to hit the next, small group of hills, the change began as I climbed. A fierce wind subsided and the temperature cooled as I climbed with HoJo up to 6000 feet.
Gradually our world turned green, bushes moved over for trees, birds darted and joined in a spring chorus as we dipped in and out of welcome shade stretching across the trail.
This four day stretch will see us through sixty miles to Silver City, where we will rest for an afternoon at least in a motel, before re-supplying for a huge fourteen day stint to Pie Town. We had the foresight to drop of a supply box three days in, but I still have to haul around eleven days worth of food out of Silver City.
Thankfully the water situation improves at least so we will not be struggling to carry up to five litres of water each.
HoJo unfortunately has been suffering from, how shall I say, slightly loose stools. We think the culprit responsible may have been a dodgy chocolate milkshake at McDonalds. 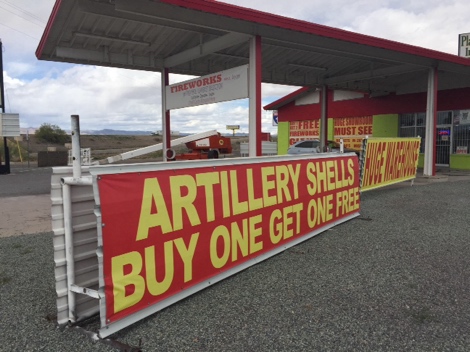 Only in America . . .
My body is faring well, I have no grumbles. I put in the training before coming out here and as always, there could always have been more pre-trip miles but with a little toga each day as well, I feel in great shape. No hobbles, no blisters, no aches or pains.
My pace slowed on this section to Silver City, mainly because HoJo slowed, the aftermath of his stomach problems saw his speed drop. I wasn’t complaining, the slower I walk at the start, the easier the body finds it to adjust.
We could still see Lordsburg twenty miles behind us through a v- shaped break in the hills and at camp, decided a fifteen miler the following day would see us to the I90 road, leaving twelve miles on the road to Silver City.
We made a great start and were away by six in the morning, keen to get to the motel and take a hot shower. I don’t generally mind road walking. I don’t have to concentrate on obstacles and detritus on the trail so my eyes can wander around my world at ease. A few cars tooted at us, no doubt an article in the local paper about us CDT thru-hikers still fresh in their minds. 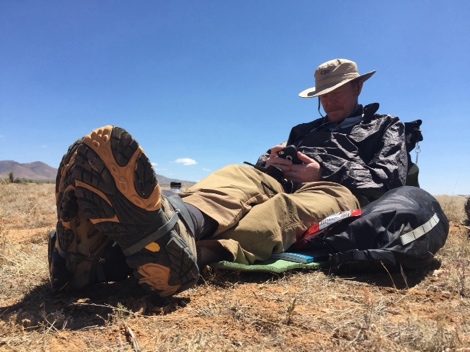 HoJo takes five
We hit Silver City at 11am and picked up some mail at the post office, then found the motel easily enough. The usual running around ensued, mainly food shopping where I not only had to pile eleven days of food in my trolley to see me to Pie Town, but also another five days supply to mail up to Pie Town itself as the re-supply options are not apparently too good there.
Believe me, eleven days of food is heavy. As I hoisted, or rather hauled my pack on the following morning and walked off with HoJo out of Silver City, I can only describe the feeling of carrying that much weight as comparing it to a small adult hanging off my shoulders with their legs dragging along the ground behind me,
Leaving mid-afternoon, we only managed seven miles and camped a short way into the Gila National Forest.
I had heard much praise from previous hikers about the Gila Forest. After days of hiking through dry, desolate landscapes, suddenly we rose majestically into the hills the following morning. The air cooled a little, pine trees gracefully allowed us some shade as well as filling the air with their scent. Water was more abundant and of great quality, it was wonderful to experience first hand this section of trail that I had heard so much about. 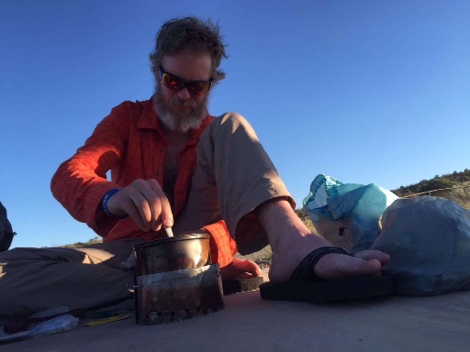 Scatman prepares his dinner
HoJo appeared to have regained his mojo, and his pace was noticeably quicker today. We pulled in the first twenty mile day after agreeing to meet this distance each day for the next two weeks or so, after fifteen milers at the start. After that, I need to be reaching just shy of twenty two miles each day for a six month hike. However, the beauty of the CDT is that it is not yet fully finished and there are also numerous alternate routes, so a hiker can make up his own route and if running late, take some shorter alternatives.
The Gila Forest was a magical mix of greenery, sand and red coloured rock formations, clear springs carving through the rock and cooler air. We camped high, unwisely, as we had been chased by thunderstorms for much of the afternoon but we were too tired to continue.
Much rest proved to be a good idea as we descended the following morning to the Gila River and the start of a hard day. The CDT weaves through a canyon here following the river. It was a case of heads down to concentrate on the route, and wet feet the entire day after so many river crossings that I lost count. The plan was to get to Doc Campbell’s but HoJo and I fell six miles short after a hard day, especially concentrating on the navigation. Rain fell in the evening as I watched, mesmerised by a vivid rainbow, offering compensation for a tough day’s hiking. 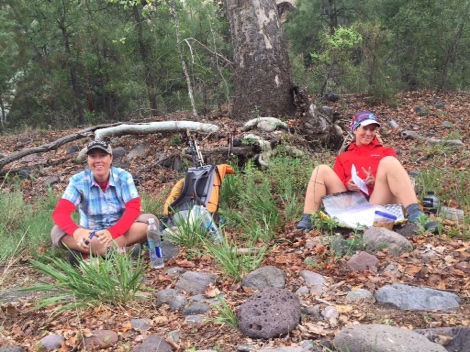 Lionheart and Beads taking a snack break just before the Gila River Canyon
We reached Doc Campbell’s early morning, feasted on a couple of microwaved burritos and eagerly unpacked a box full of food that I had dropped off at Doc’s on the drive down. My appetite is dangerous at the moment, I just can’t eat enough. One bag of beef jerky, supposed to last three days was devoured even before dinner last night. The supplies were needed and welcome.
Wideangle, Ratna, HoJo, Lia and I took the opportunity to soak in the hot springs by the river for at least a couple of hours, soothing tired muscles. A perfect end to a good day.
From Doc Campbell’s there was a four mile road walk to the Gila Cliff Dwellings which has been on my must see list for years, and it didn’t disappoint. A mile loop trail hops over a clear creek before rising to the dwellings themselves. It’s not hard to see why the inhabitants made them their home. With fresh water, abundant plant life and undoubtedly game running around, the sheltered caves must have offered a good life to those living there. 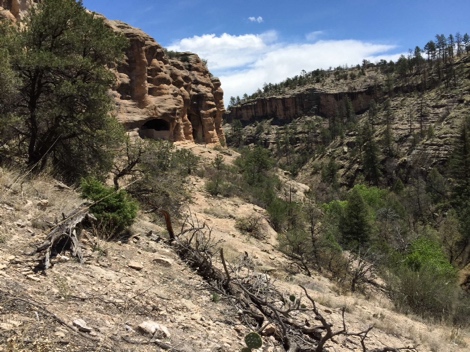 The Gila Cliff Dwellings
We had two options of routes from the caves. Option one followed the Gila River Canyon once more which Wideangle, Ratna and Lia decided to follow. HoJo, not impressed with our initial foray down there, and numerous river crossings, proposed we take an alternate trail of the CDT known as the High Route, and what a gem it turned out to be.
Because of our late start we only ventured in around five miles but the air was cooler, and the only sound a gentle whisper of the wind passing through the pines. 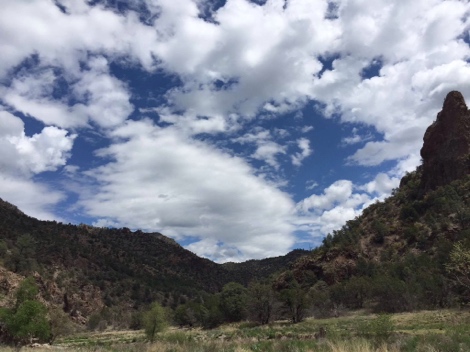 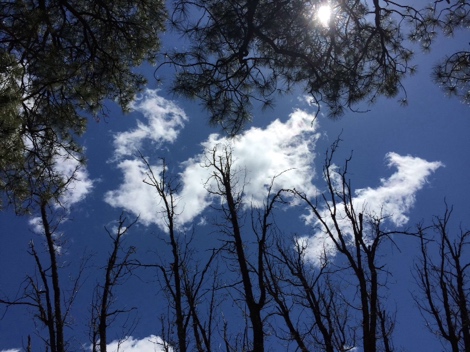 In the morning the High Route came into its own and further validated our choice. A crispy trail weaved through the dappled shade of the trees, an occasional creek surprised us as it meandered through a dry environment, it was blissfully quiet and we saw no one all day. 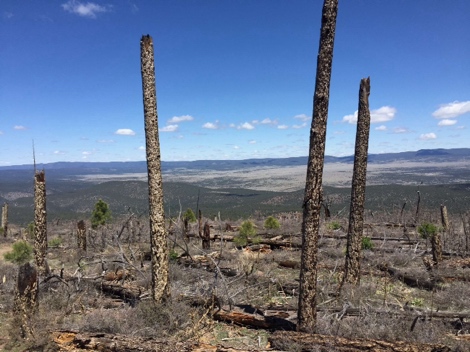 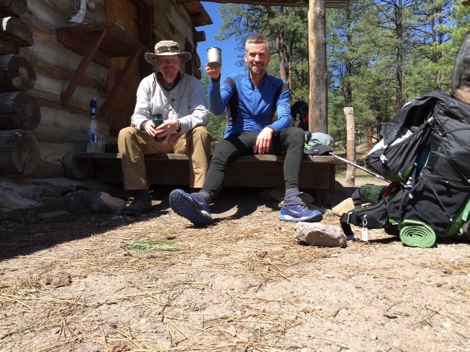 Morning coffee (at least before I ran out)
The tranquil start to the High Route lulled us both into a false sense of security, and it soon turned on us. Temperatures plummeted to below freezing at night, navigation was a nightmare entailing checking our position and route every fifteen minutes or so. Remote would be an understatement, apart from forest roads, we saw nothing man made for 140 miles. Eventually I made it to Pie Town yesterday – dirty, smelly, exhausted, cold and hungry. 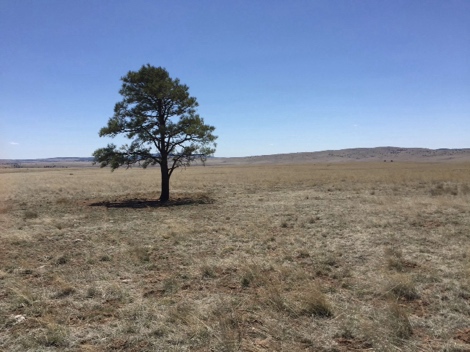 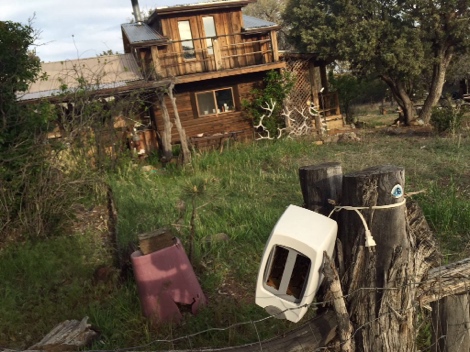